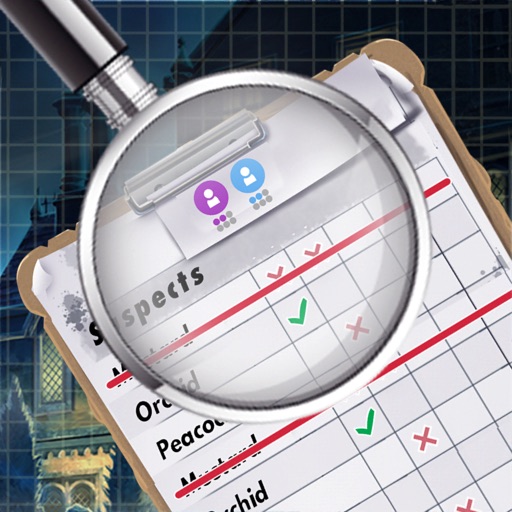 What is cluesheet companion app? Keep your Clue Sheet hidden with the Official Local Multiplayer Companion app. This app requires you to have Cluedo: The Classic Mystery Game on Nintendo Switch™ or Steam®.

A grand mansion … a dastardly murder … a gathering of suspicious characters. Play Hasbro’s beloved board game together with family and friends on the big screen with the local multiplayer mode for Nintendo Switch™ and Steam®!

Use the official Companion app as your game controller and personal Clue sheet for local multiplayer games. Take notes, eliminate red herrings and make brilliant deductions. Gather your detectives in the same room and play together, but keep your notes secret.

It’s easy to get started. Launch Cluedo: The Classic Mystery Game on Nintendo Switch or Steam®. Select Play with Friends from the main menu and Host a Local Game. Open the Companion app and enter the passcode to join the lobby. You can connect up to 6 smartphones as controllers to play together.

Use the Companion app as your personal controller for local multiplayer games.

On your turn roll the dice to move around the mansion and ask questions: “I suggest it was Miss Scarlett, with the Rope, in the Study!”

Use the innovative logic-assisted virtual Clue Sheet that allows for advanced note-taking.

Watch everyone’s actions play out on the big screen.

This app supports local multiplayer only, it’s not compatible with the single player mode.

Time to crack the case!

What do you think Cluesheet Companion app? Can you share your thoughts and app experiences with other peoples?

Hello detectives! New evidence has been discovered! An update has thrown the case wide open polish those magnifying glasses and ready your minds, because the case won’t rest until you solve it! Play the classic mystery game wherever you are!.

Since the update on switch, the passcode does not work on the phone.

No longer works with the game for local multiplayer. Very sad as we have 2 copies of the game and enjoy playing it together while local home or when away on business trips.

Zoozywoozy - App Incompatible - DO NOT BUY

Bought clue recently and did not know that the app is incompatible with the latest update from TWO YEARS ago! Cannot play with friends

Does someone in this compagny planning to fix the app’s version so it can match with the lasted game’s version ??? Local play is impossible ?

My partner and I bought Clue for the switch a few days ago, and tried to play it for the first time today by installing the app for local set up. We’ve tried creating several lobbies, and each time we put in the password to join nothing happens, we don’t get any error messages or buffering signs. Completely unresponsive, is there any way to fix this ?

If you plan to play with friend on the app. It does not work. Total waste of money and looks like there is not support and Nintendo does not refund!!!

Entered my name and the password and hit join but nothing happens. Waste

It doesnt work. I cant joint a game

Stop working. We cannot play the game like we use to.

Sw33tyyx - Its not working anymore

Can’t connect to my switch

I got the game to play with family. Every time we entered the password it did not work and said incorrect password.

Hey so your app lookes super fun but when I got it it said start and then name and password I put my name but what password do I put?

I personally think its cool because it connects to the Nintendo switch. It is used as a remote control in the game, you put i. Youre name choose youre character and press start. It will then let you choose the map. Over all i think it works great

You guys, this app is meant to be used for the switch game. On the Nintendo switch.

The GIT! - Why Is This App Still Available

Not updated for over a year, completely unusable without the password. Please remove ASAP. Would give no stars as app is useless.

Your game it says you have to put in a password but we do not know what it is. I have tried to delete the app and download it again but that doesn’t work either. If you can fix it I know that a lot of people would pay this game if it had worked. Not trying to be rude

The game are really cool but WATS ITS THE PASSWORD!?

Game freezes and constantly tells you no WiFi. App almost always says the passcode is incorrect.

It is no possible to play local game. I’ve tried several times but it keeps showing the message “wrong password”.

This app does not connect to the game. Local multiplayer doesn’t work without this app. Also, how were strangers connecting to my local multiplayer game? How does that make sense?

Took 10 tries reloading app and game on switch until we could all login. Very annoying. Call Jackbox... they have this system down.

I was able to play a game of 2 people on the tropical map without problems I’ve been waiting for this to work for a while now! So happy to finally be able to play on tv! Good job to the devs

Powerinthehair - The update did not fix the local game bug

Please find a solution to the local play option. The passwords do not work!!! The game bugs way too much...

how many times does one need to try for it to work? i’ve been putting in different passcodes for 40 minutes and it keeps saying wrong! what a waste of money after spending $25 on a game! fix it!!

Clue is one of my favourite games. So it breaks my heart that after the couple of times that we played it stopped working. It says the passcode is incorrect even though it’s not. Please improve this so I can be happy with my purchase!

We bought the game for the switch and it a complete waste of money!

Works great the first time you play but every time after that it says incorrect game code. This is unacceptable! If people are spending $40 on the full game to play with friends the app needs to work, no exceptions! And 2 months since last update! Not ok!

It worked one time !!! I am very desappointed, i bought the game on Nintendo Switch and it was not cheap !!! Please fix or put the game free !!!!

So the other day I went to the local apple tree and then I saw another man killing me while I watched from a distance but little did o know I actually died that day but thankfully I had the powers of God and Anime on my side so I really didn’t die that day but I did you know??

The game is useless because the app doesn’t work. Fix this or I’m contacting Nintendo for a refund

App does not work and will not allow us to join our own private game. It keeps telling us the code is incorrect. I brought the Switch over to a friends house so we could all play Clue and none of us could get it to work. We all used different iPhones but with up to date iOS. It was sad to explain to my god daughter that we couldn’t play the game she most looked forward to playing.

Downloaded this app only to see there's issues with the app that prevent you from being able to join games on the switch, resulting in Incorrect Passcode errors.

Every once in a while you can get the local connection to work but we get the incorrect passcode response 95% of the time. Very frustrating for a game that costs money and is not playable without this app.

Numerian1 - Love the game but the companion app stopped working after the last update.

Does not connect. It will keep saying incorrect passcode, making it unplayable. Terrible for a 30 dollar game.

Incorrect password happens very often when trying to enter a local game. Once entered, the game will time out and the game will close. There also isn’t a way to roll the dice on this app, so the game times out.

Won’t work with switch as advertised. Total junk. Looks like this has been a problem for 2 years and still nothing. Quality dev team 👍👍👍👍👍👍👍👍🙃🙃🙃🙃🙃🙃🙃

Adamtheclueloser - I lost the game

The applications Cluesheet Companion was published in the category Utilities on 2019-05-03 and was developed by Marmalade Game Studio [Developer ID: 988365603]. This application file size is 653.14 MB. Cluesheet Companion - Utilities app posted on 2022-10-12 current version is 2.9.2 and works well on IOS 11.0 and high versions. Google Play ID: com.marmalade.cluedocompanion