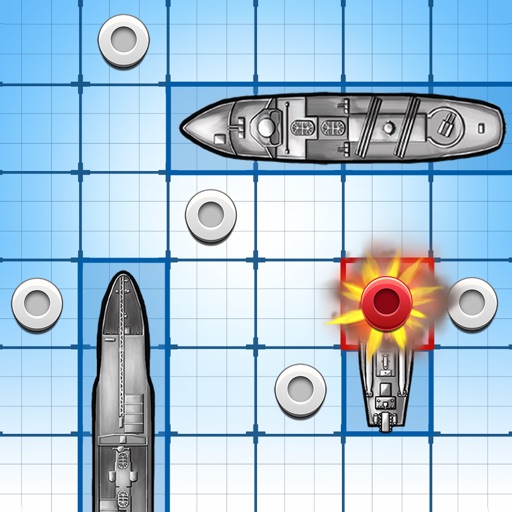 What is battle grid companion app? Call your shot and fire with the official BATTLESHIP companion app. The companion app connects directly to BATTLESHIP on Nintendo Switch™ and acts as a controller. This app doesn’t include the full game.

Play the official version of the classic Hasbro board game with your friends and family around the big screen with the local multiplayer mode for BATTLESHIP on Nintendo Switch™. Find your friend’s ships on the battlefield and sink their fleet before they eliminate yours.

Use the companion app as your game controller to deploy your ships and keep your grid hidden. Fire shots and watch your hits land on the big screen.

- Use the companion app as your personal controller in the faithful conversion of the classic board game.

- Pick your commander. The commander’s fleets feature unique and authentic art for each of the many warships.

- Hide your ships on the grid in arenas inspired by historical naval battles.

- On your turn call your shot and fire!

- Use special abilities in Commanders Mode to shake up the strategic possibilities each turn.

- Watch your opponent’s ships sink on the big screen.

Play your favourite tactical board game with your friends and family now!

BATTLESHIP is a trademark of Hasbro and is used with permission. © 2019 Hasbro. All Rights Reserved.

What do you think Battle Grid Companion app? Can you share your thoughts and app experiences with other peoples?

The game won't stay connected, so far I was able to complete 3 turns then it crashed. It also won't let you rejoin the lobby which would at least make it possible to finish the game. After checking that it wasn't my network I check online to see I'm not the only person with this issue. If you're going to put out a game like this one based on player CD player game play it should work.

Fix the crap app or pull it from the App Store. Glad I purchased the game with the notion of actually playing it, only to have it crash and not recognize anything. Can’t even reenter the lobby number to rejoin. Such a waste, honestly just pull the app if you’re not willing to update and accommodate other buyers request to have a working app.

Wife and I bought the game and we’re able to get 1 full game completed. Since then, every game we play has crashed! Come on, this game would be great if we could actually get through it without being kicked or the app freezing.

Dwimes - I don’t understand the hate!!

My fiancé and I played this game together when we were miles apart and it ran smoothly with no crashes! He sunk all my battleships!

This game would be fun if the app didn’t crash so often it ruins the experience. Please fix the bugs but from the look of the reviews asking the same thing a year ago I’m not getting my hopes up.

Msjsjssjsjsdd(#( - Why do people hate this game!

There is nothing wrong with this game so stop criticizing it!

Scalderon715 - no stars, if possible

It really stinks that this game doesn’t work. My boyfriend and I played it a few times the first night we got it but even a couple games in, it crashed. Second night now & we can’t play online at all.

It’s funny that they put this game on sale in the Nintendo switch shop knowing that the app doesn’t work and or has a low rating/ score. App doesn’t work!! Renders the game useless. Like throwing money out the car window on the freeway. Thanks Nintendo!

I tried playing this game with my wife and we couldn’t finish one match due to disconnects and freezing issues. I hope there is an update soon to address these issues.

This game is awesome but the app to try and play local with 2 people is riddled with problems. Is this ever going to get fixed? Connection keeps dropping. Haven’t been able to play 1 game completely.

Worked one time and after that friend mode doesn’t work. Only reason I got the game too. Dont recommend till this is fixed.

Still haven’t been able to finish a single match with the app. See why it was on sale now. Fix this, it’s ridiculous!

Surfed - Broken. DO NOT BUY ANY OF THEIR CONSOLE GAMES

The app crashed twice within the first two matches, complete waste of a companion app.

Fix fix fix. Unplayable. Logs out constantly and can’t get back in

I need 2 phones with this Battle Grid app installed, so I can play a LOCAL MULTIPLAYER game on my Nintendo Switch!? WHAAAAAT? Doesnt get any dumber than this. Hey Marmalade devs, have you ever heard of local PASS & PLAY mode? Omg who ever thought this was a good idea?

Wont even recognize my lobby code. You’d expect better from a company that’s been around awhile but apparently mediocrity is the name of the game now.

We downloaded the app. We were able to play two full games but now it keeps saying invalid code, even though we are putting in the correct code.

Haven’t been able to finish one game before it freezes. When you exit you can’t re enter the game with the room code.

$7.50 down the drain because the companion app constantly disconnects. Even if you put in the same lobby number it states you’re using an invalid code.

Not sure if Marmalade is fixing anything. Contacted support and get the same answer every time. It’s been well over 6 months that I went from being able to use it to now just getting invalid codes. I paid for the game but can not fully use it, one would think that the App Battleship Companion is developed by Marmalade Studios then they should support it and address the invalid code issue. Totally regret paying for a game that has bugs in it and what is worst is nothing is being done about since it’s been well over 6 months for me. Marmalade Studio’s please fix the invalid code issue with your Battleship Companion.

Mosteck1975 - Worked, but not working now

We use to be able to connect to the switch, but now it always says invalid code. Tried reinstalling, rebooting, etc. Nothing seems to work.

The applications Battle Grid Companion was published in the category Utilities on 2019-05-27 and was developed by Marmalade Game Studio [Developer ID: 988365603]. This application file size is 224.15 MB. Battle Grid Companion - Utilities app posted on 2020-06-04 current version is 1.0.6 and works well on IOS 9.0 and high versions. Google Play ID: com.marmalade.battlecompanion