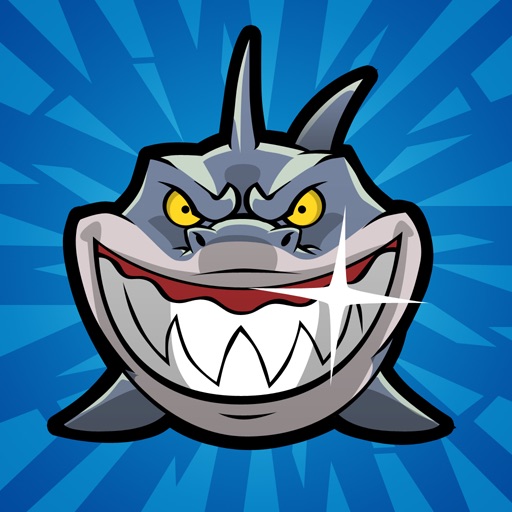 What is shark or die app? Those nasty humans keep making shark fin soup, so it's time to turn the tables! Turn into an ocean predator; avenge your relatives and snap anything in your jaws that comes in the way of your mighty bite: swimmers, rubber ducks, beach babes and more. Watch from the sea bed as these lethal hunters strike with chilling speed and efficiency and even gobble up your own friends! Yummy! Collect achievements to let your feeding machine reach new levels. Discover new abilities and instincts, allocate killpoints to give your feisty fish some personal training and make it even more dangerous. Compare your best scores with those of your friends, and enjoy a reign of pure terror in the highscore rankings!

Do you love Shark or Die app? Please share your friends!
Download and Install App Now 🚀 Play this game on your computer

What do you think Shark or Die app? Can you share your thoughts and app experiences with other peoples?

How to contact Shark or Die (HandyGames)?
Find this site the customer service details of Shark or Die. Besides contact details, the page also offers a brief overview of the digital toy company. https://appsupports.co/376992619/shark-or-die/contact

The game is fun and the 3 add ons for 99 cents each were worth the money if you enjoy playing the free game. Hopefully the developers will add more to it - new levels, goals, other sharks, etc to make it a bit more interesting. Overall I think it's a good game with great potential to be a terrific game.

Some of u may not like it but for me its really fun and sorta addicting ive seen no problems yet so four stars cuz some adjustments could be made!💓

Hi like it but it's nit my favorite but I'm about to play it right now though.

I Have played this game a lot and it is vary good:) If you do not have this game you should get this game

Best app ever I love it when it says "Bloody Breakfast" it is so cool so fun and I love it. By the way I am 9

This game is really fun but I can’t play it with iOS 11 and up.

It is ok. Not my favorite but free is hard to complain about.

Great fun game it is an cool game that will keep you occupied for hours it's so so so fun and awesome this game.

Super addicting me and my baby mama play alot

I love this game.I play this game all the time

NOT 2 bad not 2 good game 2 play when u have nothing better 2 do but it's pretty good.

Addicting, easy to play and like the title says fun!

Raw flesh what more do you need. Love it!

Thel33t - Boring too many adds

It's not that fun and there's waayyy too many adds the game practically begs u to buy the other packs that I'm sure are the same fundamentally boring gameplay it's like that other fish game were u eat smaller fish then u until u get bigger only without the fun foodchain concept and there is no bigger fish to avoid or any enemy maybe there should be divers with spear guns or people with guns on boats as is it's just a race against the clock that really doesn't make any sense for some reason even though I was eating 2500 lbs. Of food I still somehow starved to death but thank God I did cuz I was bored by the 2nd round and by the 7th I was going to quit if I didn't die. But this game only has 3star potential even if the improvements I mentioned were implemented it would still be boring. There are just way too many other fun games for me to waste my time on. And they dont have ads ontop of the playingfield that's just a dirty trick and is almost another game itself called don't accidentally hit the ads boring and annoying. Also the ads to buy the other 3 packs constantly popping up and floating by several times every level plus at the load screen and the main menu and before u even start the game. U came on just a lil too strong actually way too strong it feels like this game is just one big ad. The polish and graphics are ok and it's not totally Terrible or unplayable so it earns 2stars instead of one if I could I'd take half a star away for being annoyed constantly by ads and begging me to upgrade. They should show u the option once and have a designated place in the menu for that stuff so if u do so decide to buy u can but don't shove it down our throats if u don't want bad reviews by annoyed gamers and remove ads from the play area everybody hates those and nobody actually consciously buys whatevers up there that we are ignoring anyway so why bother? If ur targeting dumb people who accidentally click on it and are dumb enuff to think they have to buy it to make that screen go away then that's a sad way to make $ so try to find a less invasive way of advertising

It's ok. If your board then it may be good. But I don't recommend you buy it. But killing games are cool. So get this one.

The mighty lord - Eh, not that good

Pretty much completely boring! Probably jaws revenge is better! Biting game! Get this game if you like boring games I guess.

All I have to say is awesome

Love it! Come on buy it it's fun really fun!

Good game it was worth the money

It was not as good as I thought I was going to be so that's why.

The controls are stupid and it's boring don't waste your time

I expected it to be a little better

This game is so hilarious......love it

3rd best game next to jaws revenge and jaws

Terrible game boring and not fun.

It's kind of bad just not that good

Game doesnt even turn on

This game is disturbingly awesome!

This game is fun!!

Hey this game is alright i guess! :)

I just love this game i have not played it yet but it smells very yummy!!!

Bzooooo - What a pile of rubbish

Seriously bad theme, how can being shark eating people be fun! Boring gameplay and pretty sad idea. I just witnessed the death of creativity!

This game is cool but boring or u have to do is tap the people so the shark can eat so I give u 2 stars :)

What a horrible game

Best game on the app store!

This game is awesome but a bit sick. Lots of blood but great anyway. You should definitely get it!

Yeh I hate it

This game is fun and boring at the same time :|

I don't get the rating part

Most boring game I have played off the app store. It has adverts in it even though it's a FAAD app. Aren't FAAD apps supposed to be the full version, free for one day? All round bad game.

Even though it's free it's bad

It is a fun game

I love sharks but this is hilarious love it

Shark or die is a very fun game. I love it when I touch the people and the shark goes after them.

It's an ok game to play when your bored but when money comes along it's not worth it.

The Stocks - Mediocre at best.

I tried playing this game several times and it always crashes!

Boring and packs cost too much

This is quite the fun little shark attack game, I enjoyed it quite a bit. The only thing that made my four star rating drop to three was that the top of the screen is in a different position than most of the other apps. Other than that, Great App!

Font get this whatever you do

should have restriction to youth

Fun, addictive and simple. Only they should just sell the entire game as package. There are three in app purchases that make it great. $.99 each. Without the add ons the game is repetitive. Good humor and a bloody mess.

I love telling people that sharks have to keep swimming or they die. Like, 7 out of 10 shark conversations I have will involve me bringing that up at some point.