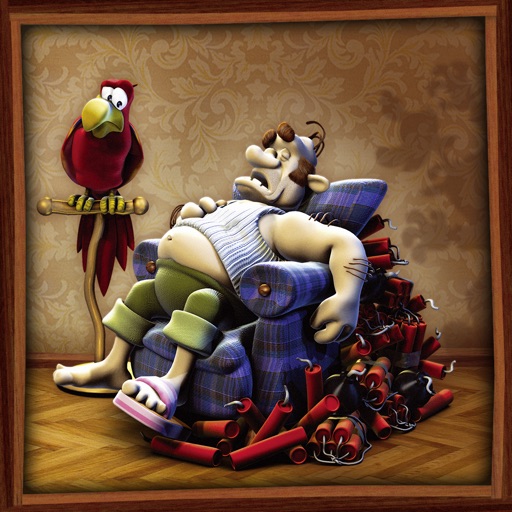 Creep around your neighbour ’s house performing ever more elaborate tricks upon the unsuspecting resident.

As the star of a fantastic new TV show, cameras will track your every move as you set your fiendish traps. Your objectives are to create more and more disarray, increase ratings and maybe even winning prestigious awards. But beware of watchful neighbors and alert guard dogs; if they catch you then the show will be taken off air.

Key Features Neighbours from Hell (Full Version of the game) :
- 14 hugely varied episodes of anarchy
- Use stealth, skill and style to perform the perfect ambush
- Easy to use interface and controls
- Superb cartoon-style graphics
- Excellent soundtrack

Do you love Neighbours from Hell - Season 1 app? Please share your friends!
Download and Install App Now 🚀 Play this game on your computer

What do you think Neighbours from Hell - Season 1 app? Can you share your thoughts and app experiences with other peoples?

This app has been updated by Apple to display the Apple Watch app icon. - bug fixes.

Im so happy that I found this old game in here. Really enjoyable game. I don't understand why some people want this game for free. Its only $1.99 and if that helps the creators to come up with more games like this then Im happy to support. The level of paying attention to details is remarkable and I hope to see more games like this in future.

I and my brother used to play this game on the PC all the time. Oh, what memories!! Back then we didn't have any money to buy this game and had to down the cracked version. Now it's time to give back. It's only 2$. I hope to play this again with him. Thank you for having this on the app store.

So awkward that you download 1gb, and at last,you can play 2 missions and then you've got to pay for it, come on, it worth the download, but doesn't worth the money.

Broo i use to always play this when I was little! I didn't mind about the ads, or how much it costs. I love the game! its so good 😛i hope this have season 3 maybe? But ty for making my childhood better! Have a great day! 😎

I love the game and it’s all fun and I love how the neighbor gets mad,but there are so much ads and I get really annoyed.i usually think it only happens once but the ads are too much..can you please remove the ads?

There are so many people mad about not wanting to pay for it but I think it’s worth it, It’s only 2 bucks and so much fun thanks guys.

SavvySlav - A blast from the Shockwave Flash past!

Haven’t played this thing since seventh grade. God, did I miss it!

This game is literally a part of my childhood. I was so excited when I found it available on App Store, but then it is such a disappointment. Too many ads vs. we have to pay to get the new episodes which is already being around for a while. 🤷🏻‍♀️

Vy and katy - Too much ads and game crashing

As much as I love this game on pc and pretty sure I'll like it on iOS too. But why do u have so many ads? Plus the game crash after an ad pops up or it's the game itself idk. But plz remove the ads and fix the game from NOT crashing. Thx u

This is a very important question about this game and the other one.. Why the ads still on even if we pay for the app..!?

Thank you for making this game free and available to us. I’m so happy it’s amazing it’s fast it’s elegant it’s so nice!!

Cmon, you seriously can’t afford to pay 2 dollars for a game? Then you must be a complete loser! Great game!

OhSoSecretCoupons - Paid for the full season but it didn’t unlock. There is no way to fix this.

The first few levels were fun so I paid for the rest but they never unlocked. What a waste of money.

I hope it will be free for all episodes 🌹thanks

Good game and it is worth $1.99 thats one cup of coffee and you have game forever

I have purchased the game but i still keep getting ads and the episodes are still locked for me. Also, when i tap on the season 2 it directs me to the AppStore!

Just please make more of it

The game make purchases not asked me , just send a lot time to confirm with my Touch ID, so when I push bottom it make purchases and go home screen together!!!

Doctor dero - paying for other episodes

Why it’s not free , I was so HAPPY to see this game in iPhone and you guys broken my heart by this option , I played only three episodes 💔💔💔 I swear I cried because I can’t pay

Silurians - Not a free game

Was so happy to see this game coming to iphone until they wanted me to pay. Don’t even download, you just start enjoying it then you need to pay for the stages

Too much ads! I bought the full version but the episodes r still locked ! Season 2 is not even there! It directs me to the app store

Adoodleso - DO NOT PAY FOR THE FULL SEASON

I paid for the full season and it didn’t unlock it. I’ve reached out to the company 3 times...no response. The restore purchases button isn’t even active

I looove this game and i remember playing it on like 2008 its such a good game but the app keeps crashing and exiting out in the middle of the level :( Please fix it and i will change my rating stars

As soon as you open this app it tries to charge you! Glad I had in app purchases blocked! Also, WAY TOO MANY ADS!!! I didn’t even get a chance to play the stupid game!

Thank you, I love this game.

How bad it is that you install this game, you will see with enthusiasm for the money you want to continue! I regretted installing it

At first it’s free, but after 6 level you should purchase it

That will never happen. Pay for this game

I grew up with this game. But why do I have to pay for new episodes? 🤨

Way too many ads. The game feels very badly made. Do not buy this.

TOO MUCH ADS. IT’S A GOOD GAME BUT NO ONE WOULD ENDURE THE ENDLESS ADS!!! And I was disappointed when I saw I needed to pay for the episodes.

You can’t complete the plays it stops at episode 3

Too much advertisement in app. Wow its crazy. Every steps and every clicks, one ad must watch.

Please unlock this game for free

Way to many ads

I want play all game Episodes .. Why you opened just 5 episods.

Ssaassann - Not worth it if it’s not free

Sogoldolatshahi - error for next chapter

it was good but in game when i try to played another chapter it was impossible.. and i deleted it..🤦🏻‍♀️

Don’t bother downloading the game it’s not for FREE!!!!

When this game has a full version

Hi. Good game but I'm having the same problem. I've done all the intro episodes and three episodes in season one but I can't unlock Ep 4-6 in season 1.... pls fix. Thanks

This game was my childhood when I had it on a disk... Love the new version!!!!!

Kahabara - Unable to lock the levels

Love the game. But couldn't play the next episode in part 1 season 1 though I got full scores in other parts. Is there anything wrong with the app?

It's my favourite game ever but I can't access the next episode in season one. Is there a glitch ?

NTTam - Cant unlock for next ep

Unable to unlock for next level

Purchased but all episodes are still locked and the game keeps asking for purchase!

Why no episodes after the 3rd one open ???

Been waiting for this to show up on iOS. Easily worth the asking price of a couple coffees. Looks great on iPad as it’s originally 4x3 stretches a lot on iPhone. Straight forward controls, great puzzles and animation. Recommend.

I was super happy to see the game and I bought the levels but instead of being debited 2,79$ I was debited 8$! Be careful people!

Please make the rest of the episodes Free

I finished the first season and I'm asking where is the second season??

I don’t know why, my iPad no sound, and my son have with cell phone.

I fon’t understamf why all these ppl are complaining! The game is free for the forst 3 episodes and adter that it’s literally $2.70 to unlock the whole game... $2.70!!!!! Totally worth the purchase

呀呀呦 - it does not have sound

The sound does not work

It sucks that only couple first episodes work and that's it! You can't move forward!

How can I unlock ep 4th

Not worth the purchase I was expecting it was free

I was so excited and yelling that my favorite game is playable on iOS now ! But it seems to be a paid game !!! I am frustrated... PLEASE Make it free and add ads to earn from it and let the app purchase to be ads removal instead of game unlock. Please !

It should be for free

I'm happy to have this game finally but too bad that's after the 3ed episode the other episodes it won't be able to open it i don't know why .. and sometools i don't know where to use them

One of the best game I've ever played 😍