Who’s in your Justice League? Join your favorite DC Super Heroes & Villains in the best fighting game on mobile. Assemble a team of heroes like Batman, Flash & Wonder Woman to combat the forces against you. Master new combos and crush opponents in dynamic 3-on-3 battles. Upgrade your Super Heroes with special powers as you fight your way through the game. Become a champion by collecting gear for your characters and dominating your foes in PvP contests. Every battle will define you—join the fight and become the ultimate DC champion!

• Unleash epic combos on your opponents using Superman’s heat vision, The Flash’s lightning kick, Harley Quinn’s cupcake bomb and much more
• Take your battles to the next level—inflict massive damage using your favorite DC characters’ super moves
• Earn rewards from each fight to customize your Super Heroes with powerful gear, and collect special characters like Armored Superman, Arkham Knight Batman and much more
• Team up with friends and assemble an unstoppable League! Together you can prevent the collection of worlds and defeat the ultimate boss, Brainiac.
• Be social—chat with friends, donate hero shards, participate in Raids, and more!

• Injustice 2 continues the story set in motion in by the hit game Injustice: Gods Among Us
• Immerse yourself in cinematics straight from the console—with the Justice League shattered it is up to you to pick-up the story and unite a team
• Experience the best graphics on mobile—play with Superman, The Flash and many more in high definition combat
• Become the champion the world needs—enter a contest of Super Heroes where only the powerful win

FIGHT YOUR WAY TO THE TOP

• Join the contest—enjoy daily challenges and rise up the leaderboard with every victory
• Enter the PvP arena and fight players around the world to become a champion
• Unite the likes of Flash, Supergirl, Batman and more to fight in epic PvP combat

What do you think Injustice 2 app? Can you share your thoughts and app experiences with other peoples?

3.4.1 addresses the following issues: - Crash that occurs when certain characters battle heroes that have the ability to revive. - Knightmare Batman bug found in Champions Arena. - Visual issue that caused issues with locking and unlocking gear. BvS SUPERMAN’S LEGENDARY TRANSFORMATION! Gold BvS Superman is now LEGENDARY Justice League Superman and he’ll stop at nothing to protect his teammates! His new passive ‘Do You Bleed’ boosts Defense for Legendary and Justice League teammates! When Superman’s teammates need help, Superman can fly into battle and interrupt incoming Special Attacks! Superman also benefits from Legendary and Justice League team synergies. If you already own Gold BvS Superman, this Legendary Refactor is free and available now. Collect and upgrade Legendary Justice League Superman through new Special Offers and Chests! NEW UNIVERSAL GEAR TYPE: ARTIFACTS! Introducing a new universal Gear type, Artifacts! Artifacts unlock a 6th Gear slot and can be equipped on any Hero to gain bonus stats and unique passive bonuses! Some Artifacts grant additional bonuses when used on specific Heroes or Classes. Revive any Hero with the new Kryptonian Regeneration Matrix Artifact, or equip on ANY Superman to gain an additional Attack bonus upon revival! Artifacts can be upgraded like normal gear, but use a new unique material called Azure Artifact Fragment! Ten new Artifacts are available now and can be earned through Raid rewards and new offers available in the store. NOTABLE CHANGES! Defensive teams can now only be assigned once per Champions Arena season so choose wisely! And Hero availability will now be visible while you’re selecting your Defensive team. We’ve also added Legendary Brainiac and Legendary Gorilla Grodd Gear as possible rewards in all Raid difficulties. It’s time to gear up! HAPPY HOLIDAYS, HEROES! Ho Ho Ho! Happy Holidays! Stay tuned for details on amazing holiday deals! JOIN THE COMMUNITY! Join the official Injustice 2 Mobile Facebook and Twitter pages for exclusive reveals and upcoming announcements! Follow us on Facebook: @Injustice2Mobile Follow us on Twitter: @Injustice2Go Thank you for playing Injustice 2 Mobile! Ad Choices: policies.warnerbros.com/privacy/en-us/#adchoice Terms of Use: warnerbros.com/terms/en-us Do Not Sell My Personal Information: wb.com/donotsell 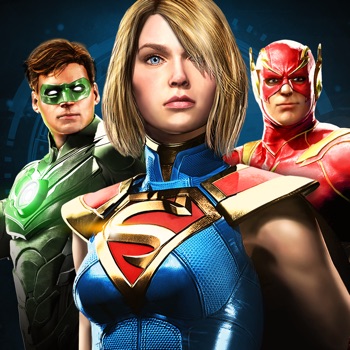