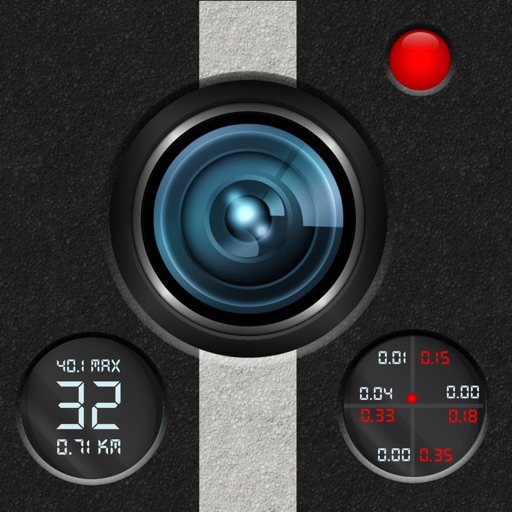 What is carcam app? Turn your iPhone into a dash cam to record your beautiful drives, trips to the race track or just our everyday commute.

Store your videos in the app or export to the iPhone's library or directly post to your Facebook page for your friends to see!

What do you think CarCam app? Can you share your thoughts and app experiences with other peoples?

How to contact CarCam (Hans Schneider)?
Find this site the customer service details of CarCam. Besides contact details, the page also offers a brief overview of the digital toy company. https://appsupports.co/574418130/carcam/contact

* Fixed a bug when deleting videos. * Fixed bug "Speed not showing 0 when stopped".

Purchased Pro and speedometer not working. I prefer the gauges to be removed during live recording and available during playback. App is okay and can still improve, looking forward to the next update.

For the most part, this is a pretty good app. I've used this on my iPhone 4S and have had the app randomly shutdown though. Speed indicated isn't 100% accurate though (seems to show about 2 mph slower than actual). Also zeroing out speed when slowing and coming to a stop seems slow. I can come to a full stop and begin to proceed and app hasn't caught up with the stop and start period. If accuracy is improved and fixes for random shutting down, I will definitely purchase this.

This app is pretty good overall but has two cons with it: 1. At night the camera becomes out of focus sometimes and doesn't adjust until a complete stop. 2. It sometimes randomly crashes. Other then those two issues its a good app.

Downloaded the app and paid for the full version. Full version still doesn't give you speed. I used the contact link within the app a couple weeks ago and still haven't heard from him. The app crashes more consistently than it actually works. I feel robbed, don't waste your money.

I like the speedometer furring playback but howa bout replacing the g force meter with a map and actually use the location service part of it? The recording is a little choppy but other than that good app.

Love the app. Would like it better if the videos recorded in segments. Like the fact that the GPS can be turned off with in the app. Great job!!

From other reviews looks like Hans is not supporting the app since 2013. I bought the app yesterday for a 6 and an old 4, worked for awhile on the 4 but will not work on the 6. I bought the upgrade up front, bad on me. It opens to a gray screen and then goes back to the apple home page.

App is good except it locks up when receiving a call, or if you play music from your phone. Otherwise it's good.

Useful app. And I paid for it. Please update before iOS 11 cleans house

Would like to know when it will be updated. It’s a great app!

Worked good the first time I used it, but since then I can't even open the program. I've tried restarting my phone and even deleting and reinstalling the app but nothing's working. Running iOS 8.1.2. On an iPhone 6plus.

Can't listen to music and use this app at the same time, what use is that? when your iphone is how you listen when driving.

Still Waiting on Update ...... Does not work on iPhone IOS 11 hope there’s a update soon

Still waiting for update. App will not operate with iOS 11. Fix it please.

Does Not Work Put A Bug On My Phone

Totally useless Unable to get it to run

Was a great app until ios 11 now it won't even open until updated.

Great app , worth the money to upgrade to full version. Camera is a bit slow, but doesn't crash and exit as some other dash cams. But keep power cord pluged in or your battery will drain fast.

Good idea, but kept crashing on me. A complaint to the developer went unanswered. Found a better app for around the same price, it's called Car Camera by AppAnnex, LLC. It also has loop recording, which this app does not.

Tycho Redleaf - No features are available

All of the options and the ability to export videos are missing. Everything they show in the photos and talk about in the description requires you to purchase the app. This app is a lie.