Try to poke and flick your ball as high as you can.

How high can you go?

What do you think Pokey Ball app? Can you share your thoughts and app experiences with other peoples?

Fun game but too many adds.

I had accidentally hit the ads on the bottom of the page as many people probably do and norton antivirus popped up appeared as unsafe. Hum what’s going on there?

The game isn’t bad but it shouldn’t be anything close to five stars, not even like 15 levels in its already so simple with next to no challenge. I think the first boss level was good making the stage crumble behind you, but there’s literally no level select so I can’t go back to check. Not that you’d want to really as everyone else has said the levels literally repeat with zero differences past a certain point endlessly. There’s no reason to even play the game as the points it gives you are meaningless without any level rankings, coins are pretty pointless as you’ll quit this game long before you come close to unlocking half the skins with them. It’s crazy what people can get away with, like this is a decent concept for some time waster game. But holy crap does it feel incomplete like it’s in an alpha state lacking all those basic features. Do people spend money on the ‘no ads’ option so they actually profit from this, or do they earn that much from shoving two ads at the start of every single level? Forgot to mention that earlier, enjoy two ads literally every single new level. If for some reason you insist on playing this, I’d recommend using airplane mode to circumvent those ads every time until you inevitably uninstall this.

This game sucks do not play

You shouldn’t need my IP address! Do not download this game!!

the superworm - Don’t get this game

keep up the great worl - awesome

ChairThrowinTim - The fun is overshadowed

It’s a fun concept that keeps me entertained and has a solid control. But it has entirely too many micro ads that hit every level. I don’t think I’ll keep this game for long.

This game is so boring!!! It doesn’t get harder every level so it is so easy to beat and there is no challenge! You literally just go up a wall! I ABSOLUTELY CANNOT HANDLE HOW BORING THIS GAME IS!!!

I think this game is very fun and entertaining but they should come up with more fun obstacles and also there’s literally an ad after every single level, but if you turn your wifi off it’s really fun!

yeet the poop - Yet that lil ball

Yeet it!!! Full send or no send

I purchased the app because I like it but I keep getting a pop up about “support us again by allowing data sharing”. If I had of known this to begin with, I wouldn’t have purchased this app. I shouldn’t have to share anything with you. I want a refund.

Game gets very boring very fast due to lack of level differentiation and they begin to repeat after level 70.

Entertaining for about five minutes. Ads are annoying. I give it a solid Meh!

Love it, you must fast and faster

Why do you guys never put sound effect/music in your games???

Sub to my Chanel - No

Bad, it doesn’t work! I can’t play the game!

JessicaMendes94 - Ads are not silenced

Game gets boring after a while, very easy. Do not play at work, some ads are not silenced even though your sound will be turned off.

I first saw this game on a add and it looked fun, but when I got it I played it had many adds after each an single level!!! Please put less adds😔

Way too many ads. Ruins the whole game. Just wants your information

The game is too pokey

Got to level 70, boss level and there is absolutely no way possible to beat it

How tf you supposed to pass level 39

If you think I’m gonna play a game where every single level there's an AD you’re very wrong. Theres a lot of ways to make money without intrusive ads every second

So addictive am currently at level 500!

Great game really fun and easy up until level 100 which in my opinion it’s impossible. There’s no target to make the ball go higher and the ball with a flick just doesn’t go high enough and I was wondering if that’s the last level?

I found that when I downloaded this game it was fun trying to win all the different ball designs but once you have won them all it’s kind of boring and I went on the game a few times today and I left it with 3383 coins and came back and there was only 2000 which was quite disappointing but I just think what’s the point of still winning coins if there’s nothing to collect with them other than the 3 sections of ball designs other than that the game helps when your stressed or bored !!

This game is amazing

I have to say this game was great when I first got it could not get off it but then I realised there where way too many ads. I also think you should be able to go back on the lvls if you want to re-do them bout it is just a bit bad

Aliceparkinson - This game is amazing I can’t stop playing!!! ❤️❤️❤️

It is a good game

The game is boring and repetitive

Ok listen. Why is level 20 (the boss) so hard?? I know some of you might find it really easy but it’s because you’re good at it. 2nd it’s kinda boring. Also every level is so short it’s unenjoyable because there’s adds after every round and every round is about 29/30 seconds long. And why is almost every level the same? Also no offence to the people who made this.

I LOVE THIS GAME BUY IT

I have l lot of fun playing this game but one of the levels you actually can’t win and even when you try to skip the level it WON’T WORK!!!!

It is amazing, all I suggest is that if you go over the winners point, could you edit it so you (if you can’t get anything) give them a chance, thanks this is also SO ADDICTING

Get to level 659 and that’s it, no matter how much you try even getting the spike to stick on the very edge of wall you can not reach the next wall. So game over at level 659

I play this when I’m in the toilet and there’s nothing wrong with the game whatsoever. But I recommend making boss levels more challenging.

Yuppymike - Waaaaaay too many ads.

Add in the middle of the screen while playing. Constant prompts asking for my data.

This a game I play everyday and it’s very addictive. But one problem theirs way to many ads so 4stars

I think this game is a great game to pass time. I’ve been addicted for weeks!

moo kyliexxx - This is such a bad game

Pretty fun but I don’t like how hot this game makes my fun. I admit I get lost in it for a long time but only as long as my hand can take the heat! Would recommend

I admit this game is fun basically u try and get to the top of the tower thingy u can also win coins. But I don’t really like the game because it has loads of glitches. First of all sometimes it just leaves the game which is really annoying when you have a high score. Second of all most of the time it just freezes and then switches off your screen 📺. Lastly when you lose the game and it says watch a video I do that and when u come back to the game it just resets. I don’t recommend this game if you don’t like all these glitches.

Stubbo. - Too many ads

Way to many ads!

dkempy23 - Level not possible to complete

Level 659 is not possible to complete

I’m now on level 222-223 and I get half way then they boot me off .I’m really annoyed because I like this game but I can’t play it.Plz fix this x -User🥳

To be honest the first time I downloaded poke all I was kinda disappointed 😔. But I was only disappointed was because I din’t understand it... Now I LOVE it and I am totally addicted to it! So it is recommended by me but if you don't it when you first download it, then give it a chance !

So what I think is that it is quite good game

Could be good, if there were less ads. Far too many

This game gives me angxiati and it hurts, So plz don’t play it if u want ur angxiati to get worse 😫😖😖😭

The game is fun but after a while of playing the game now after every level there is an ad which is about 30 seconds long and really annoying so it makes the game unenjoyable with all these ads and after a while it’s seems like I’m repeating the same round ?? Kinda recommend

The game itself is fairly decent but constantly pestering for me to change permissions so you can sell my data is almost as boring as the constant advertising.

I keep having to restart the app because it crashes all the time.

Too many ads. But it’s a fun addictive game

This game is fantastically fantastic because it’s so smooth, it’s a stress reliever~ I always use this app when I’m stressed or bored 🤧. As you can see that I have rated this 4 stars¡ The reason why 4 stars is because of the “ball” the ball, well the “ball” in my opinion needs a “fixing” the ball when you pull it down to all it can go.. 😶 It just goes up a small period..! I really don’t like that, I think that it can go so much higher! And stop at the neck of a average person, but y’know everything else is fabbbbbb 😉 So keep on going! I luv this game so much! Tysm for making this game! Bye! 👋 -0 year old 😂

after a while the levels start repeating and get very easy

The media needs reform just like the cops need reform! They fall for Trump’s hokey pokey every time. They have take…

@Inglebard4: @IamNevG @SNUKgaming I give the 7800 a giant MEH as someone who has had one since they were new 😃 The tech was outdated bef… 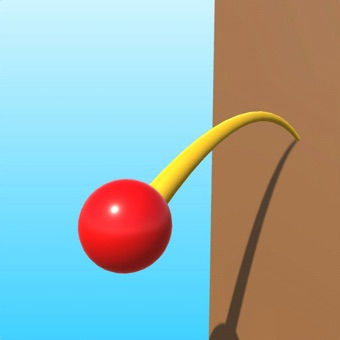