Dumb Ways to Draw is a drawing puzzle game from the world of Dumb Ways To Die! Full of your favourite Beans but not in the way you remember!

A whole new adventure to experience! Once again the clumsy Beans need your help but this time you'll DRAW the Beans to safety!

Lots of interesting puzzles to keep you entertained!
Save beans in a number of scenarios!
Real physics, interact with the world!
Win lots of shiny pencils to save your beans!
Lots of splats and funny death moments!
Localised in lots of languages!

What do you think Dumb Ways To Draw app? Can you share your thoughts and app experiences with other peoples?

Throw a shrimp on the barbie and come visit Down Under in this Australian themed update! Lots of Australian levels to explore! Brand new Aussie pens to unlock!

I love this game and I think it is well made but whenever I play it it 1. Has quite a loads of ads and 2. It is always the same ad I was getting a sonic Apple Arcade ad repeatedly for quite a while! it is just the ads that spoil it most

It is very good

u#1unspeakable fan - It is great because…

Very fun game, I’m addicted to say the least, however level 48 is glitched for me, the iceberg tips straight over when he starts walking, even the hint can’t help with it

vguururyu - Hi love you too

littlelia5 - Such a good game.

I love this app I’m obsessed

CeqrpcnCssgqiDusxUnok - How to raise downloads by 10 times?

This is a fun game and of course I appreciate that ads keep it free to download and use, but the ads are really glitchy. Often they cause the app to crash (freeze up) or you watch the whole thing and then the exit button for the ad doesn’t work. Found this to be the case on two different phone handsets and a tablet. Real shame.

sophia rl - This game is good

This game sounds gory but it really is not it is very fun, i would recommend the other 1 and 3 of this game as well. The only thing bad is it sometimes glitches of and does get a bit boring after a while, so I wouldn’t recommend playing for a long period of time

I really enjoyed playing this app however recently whenever I open the app it closes straight away and takes me back to the home page. I tried uninstalling and reinstalling I have restarted my device but nothing has happened. I advice you take a good look at your app before flaunting it off as something amazing .

It’s an awesome game but when go onto it, idk if my phone that’s playing up, but I go onto it and it’ll let me play for 2 mins and then it will close itself down 😕

Ghani41 - The up front is the most

I’m going back and I have a few more things

For some reason the game keeps on crashing

Instagram♥️ - I am not happy

I played the game until i reached 48 then about a hour later when i went on the game later found out i had gone back several levels (around over 10 levels back) i had put a lot of my time,effort and thinking skills for it all to go down the drain and be wasted😡🤬

jazlola - I recommend this game

This game is very fun

The wonderful humour and style of this game don’t manage to redeem it from the annoyances of the constant crashes and the jarring ad appearances. If they can fix the crashing then I’ll be back for more (and if they can also tweak the ads, then I suspect I will lose many hours to it), but as it stands now, it is virtually impossible to play. I still can’t bring myself to only give it a single star though, as it has the potential to be great.

This is a great game to play in your spare time and there is always someone new to save and a new life or death scenario to save them from!! I absolutely love this game, and recommend 110%!!

The game keeps crashing it won’t let me play it.

If you don’t want adverts turn your internet on DUH! The people that do kno this well done :D from your clever person

Only got to level 4 and got tired of the game crashing out on me. Also one ad tried to take money from me and I didn’t even agree to buying anything. Fortunately it said payment failed.

A very nice aesthetic and playable game let down by greed! The monetisation absolutely ruins this game dropping in ads not appropriate or relevant to the main game itself or the target audience. At level four I’d had enough it’s not just one and it’s three or four in a row. I know developers will never listen and once it’s in the public arena nothing will change it’s a pity this game would be worth paying for.

Geesthebeesknees - Too many ads that last too long

I’m fine with ads.. but they last way too long and they’re too often. Game is good but will be uninstalling because of the length and frequency of the adverts.

Hyliancitizen - Boring, million adverts no thanks

So many adverts game is unplayable don’t bother boring anyway

Fun game, BUT...rendered almost unplayable by the sheer quantity and length of the adverts. Way too many. Way to often. Way too long.

The game is ok but the constant adverts are irritating. If you win stars it makes you watch adverts to get them-ridiculous. There are adverts every 20 seconds.

Good game, but on scratch cards it hung almost every time and you never get it back! Also, sometimes doesn’t let you draw. Needs sorting asap. AND do not buy hints, as hints given on some levels are WRONG!!! Very shoddy programming!!! 🤬🤬🤬🤬

myalee.mck - A great game in my opinion 👍

Every level is possible no lie I tell ya there might be a lot off ad’s but beside’s from that it deserve’s 5 star’s! Developer just want too know if you could put in less ad’ From mya To developer

AJ1AJ - Has some issues but still a fun game

The levels are fine and fun to play (although the last few are a nice challenge), and its fairly simple to understand (no tutorial though). There are some customisation options that also look really nice...but, ...The shop to buy things with coins is partly unaffordable without IAPs. I got a total of 4595 coins from finishing all the levels. I mostly played outdoors without internet access so I never could use ads to double coins or use the jackpot feature to multiply coins after a level (if you use both on every level you can you can probably just get enough coins to buy one of the most expensive items that cost over 10000 coins, but only one not all) and since you cant get coins after you finish a level once, you cant get the other pencil types ever... well personally i don't care since the one i wanted (cloud) only cost 4500 coins, and i suppose since i did finish all the levels so i wouldn't play more unless they added something new... but it still seems weird since it might as well have costed real money if it isn't possible to get without playing online *shrug* still a great game and worth playing.

I have had the original dumb ways to die for years now and I am very happy with this game. Hope you keep improving it

Sega20 - Shoves ads in your face

I get that this is a free game, but putting ads in the game every 3 levels (or when you attempt a level 3 times) gets really annoying. And micro transactions are everywhere. 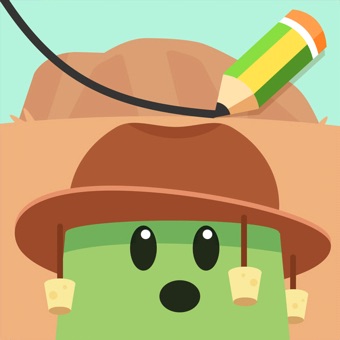