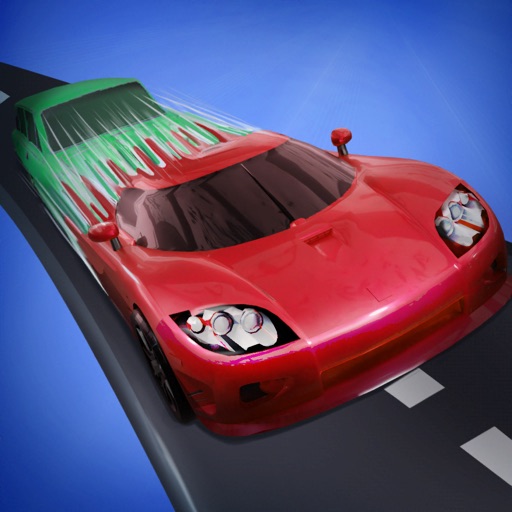 What is draft race 3d app? This is a big challenge! Beat yourself! This is extraordinary fast drive! This is Draft Race!!
We are in the middle of fast drive challenge. You are upgrading yourself in top speed base and in income base.
Blue old car is starting to Draft. There are some gates on the way. Blue and red ones. Blue is incrementing speed. Red is decrementing speed.
Choose a gate which will accelerate yourself. When you pass through blue gate your velocity will be higher. When your speed is higher automatically your car will be changed according to your speed with a faster car.
There are some obstacles on the way such as stop sign, unused tires. Don’t hit them. They will slow you down.
You can check your speed just above your car. You can check your income right up. You can check your position in track at top of screen.
How fast you can be? Your end line is you! Pass through blue gate more, get more money, be way from obstacles.
Use “Shop” to increment your car into faster and bigger and more fascinating cars.
Use boosters such as: NOS, Shield and Magnet to have more gain in the game.
Be careful with the upper highways and right & left subways not to decrease your speed.
Then Be “Fastest Driver all over the world!”
Be careful! Take all your attention! You can be owner in the leaderboard table of 1st line forever!
Increment system will make you faster. Take attention to right and left side roads. There is plentiful money over there.
If you want to drive over the ramp you have to be fast. To be faster you must get money on the road and use incremental income system.
In Level end, be careful! Don’t hit the red walls. Don’t let anyone celebrate themselves under spotlights and got applause!
Looking for some fun and thrill? Then this 3D running game is just for you! Draft Race is perfect runner car drive game you have ever seen!
Download it, play it, get most fun! We promise you won’t get bored!

Do you love Draft Race 3D app? Please share your friends!
Download and Install App Now 🚀 Play this game on your computer

What do you think Draft Race 3D app? Can you share your thoughts and app experiences with other peoples?

ZAMBRANOCHRIS - This game is loads of fun!

I love this game alot! Theres only one flaw though. I think ads are fine for free games but instead of making it after each race you should put it as an option to get a little bit of free in game currency! Thank you!

This is a very addicting game. It is one of my favorite mobile games. But, the reason I only gave the game 4 Stars is because THERE IS AN AD AFTER EVERY LEVEL. I have to turn off my work and my data just so I don’t get an AD after every level. Please lower the amount of ADS. It gets really annoying having an AD after every single level.

Elfd - Such an awesome game

My 10 yr old son cannot stop playing this. He absolutely loves it. He says it is so much fun. I love the fact that he prefers this game over other games that can be violent. This is a great race game that will hook up any kids and adults. Highly recommended.

It was a good game, didn’t get far till I starting getting stuck on levels and was forced to what he reward ads to progress, since their was ramps at the beginning that needed certain speed but you couldn’t get it high enough if you got the highest number you could get at the start, a game that forces you to watch reward ads is a bad game.

It won't let me chat - One thing

I enjoy this game because I play a lot of games like these.

You start a level at 60mph, and you need to reach 100mph to go over the small ramp. You are only able to get 2 bonuses of 20 and 7mph max, so you’re only able to get 87mph before you reach that ramp. Physically impossible, nothing you can do.

My friends cannot stand the ads, but this is so satisfying my friends play this every, day

INK was taken how dare - Too many barriers at the end

The game was fun up until you can’t complete a level early on without watching an add. And even then You can’t complete it. So don’t get this game for your own sanity, it’s stupid and literally impossible without wasting your time

Hoebidenisjoe - Why fix this now!!!!

So many adds. And when you unlock new cars you have to watch an add to get them so I click the add and I get no cars even tho I watched the entire add.

I had so so much fun - I love the game

Jake is awsime - Get ready for your phone to die.

I have to take an ad to get more speed useless

way to many adds

Level 17 is impossible fix it

The ads are to keep the game free to play!

I’m on level 7 and how am I ment to actually win since the highest I cat get is 97 and u need a 100 so like fr what am I ment to do I’m just stuck.. I thought the update would have fixed it

Forcing us to watch ads to physically progress through the game