Time moves when you move !

You want to know what it feels like to be a Super Hero ?
Join us and become a Samurai Flash !

-Dodge and slice your enemies to reach the next level

-Defeat bosses and show your skills


New features are to come ( character upgrade , skins and accessories )

What do you think Samurai Flash app? Can you share your thoughts and app experiences with other peoples?

I do the funny

Bruh where the F$&@ing sound

The game is well made and quite enjoyable when you first download the app, however, it’s gets quite repetitive and there’s no real challenge to the game. The game would be 4 stars if the swords were a button you had to click and the enemy would actually attack you before you can “slice ‘em up”.

wall of bricks - It crashes ☹️😡

chugfrugfruhur - This game is the best game

I can’t played my IPad for a week and it happens while playing it!So never download.Promise that won’t download

ConnorGames_YT - The best game ever !

Before it was complete trash not gonna lie. This new update improved it a lot and now it’s alright as a game. I recommend that you can get cool animations if you use the right skin and the right sword. Also you could add a dance shop so when ever you beat a level it chooses the dance you can equip.

In case you live under a rock, this is an obvious copy of the VR game “SUPERHOT” where the time only moves when you move and you have to defeat the red figures. Hmmmmm, time control? Hmmmm, red figure enemies? Garbage game doesn’t deserve support.

Also kind of a copy of super hot

It is so bleeping good I recommend it

The game is kinda fun.but u get bored after playing for a while.And some times they just make u play a level that u already played befor,it’s the same with all boss to.So I give it a 2

My little brother said it is a very fun game

I like the game but it seems like the only female characters are the hostages. So maybe make some girl characters you can play as.

Good game but I can’t see more than six skins please fix this.

flubner - So many glitches and ripoffs.

There are many glitches. One is that if you touch the end of the goal you can fall off the edge of the stage and dance while falling. Also if you find a bunch of cutable objects, cut them so much that the screen’s lag turns into 5 FPS. Then it will launch you in the air. After a boss, when you kill it you fall off the edge of the platform, and then it’ll show the dying animation and then say good job. This is a super hot ripoff, and the missiles are obviously just the bullet bills from the Mario series. And also there is an infinite money glitch. Find a enemy who shoots missiles and has another enemy in the level, so touch the goal at the side so you fall off like I previously said, while you touch the side have a bullet bill hit you while swiping at another enemy. This makes the game freeze, since you get hit with the bullet bill while touching the goal. Then make sure you are hitting the enemy and it’ll put your character in a loop, hitting the enemy getting infinite money. After 30 seconds you will have 99,999 big bucks. I rated this two stars because it is glitchy and a huge ripoff. The reason it is not one star is because it is kinda fun. But the dances are stupid. Not as bad as Bowmasters though.

The first time I played it I thought I would have to wait through an ad but I was surprised to see that there was no ad until the boss level. It’s fun and doesn’t have ads after every level! I recommend it.

Amazing I love it

Use guns of weapons for four range two of them and it should go to your wall for both ends and your character and in close range do you use both of your swords.

The concept is nice, as well as the slicing physics. However, the levels are way too easy and get repetitive after about 10 levels. Please make the game more difficult and less repetitive (ie. more projectiles at a faster pace, add a jumping mechanic, needs much harder bosses, maybe add power ups, add ways to progress your character other than skins). These are all ways to improve a very interesting game and concept. You have had a very good idea with this game, now you just need to make it an actual playable experience as to ensure such an interesting approach doesn't go to waste.

Jdcaple - The Next Top Gamer

This is a great game other than the lag! Great Job!!

Pretty good attention to detail and whoever’s designers characters did a mad as job if you could put his swords in too that would be awesome.

Good game but can you please fix the glitching or buffering.Because I can barely do anything.

riverthewaterman62 - I love this game so much

Really fricken fun but just when I stop moving the whole thing pauses. I think that makes it to easy the bullets should go faster. Maybe you can put that as a mode cause that would be amazing! Other than that it’s a good game!

I need more difficultly Extreme map thingy thing thing it’s too easy Me: shutup fbi I do not need u talk fbi: fbi open up!

The only reason I gave it stars is because it has pikachu! XD

Hey guys! I just wanted to come past and tell you that your game is more than amazing...BUT I’ve repeated the cane more than 4 times and I just thought that I think it’s time for some updates and add-ons! Overall your game is amazing and I hope the improvements will be made! THANK YOU✅

TSPplayz - This app is ok

I really like this app because you get to run around slashing people and the bosses were easy to kill but it was still fun.This would be five stars but it’s not because I can only go into the app once so if I close it and go back in then it just closes but besides that it’s a great game keep up the good work!!

Best game ever you cannot say no to this game

BSHEUSJDJSISJEJSJDNSNNUR - super good game and i recommend it

Its a really fun game and i love it i don’t have anything bad to say about it except the boss levels they are a little to easy but altogether its a really great game!

I love it but can u pleeease add I banana skin

ninja_pantsno.body - This is the best game since 3D run

This game is really good! I recommend it as you can play it for hours and hours and you will never run out of levels! It can’t get any better then this!

spooky01 - This is an amazing app

I like how you get to do boss levels and I think that maybe kids could be aloud to play it too because it’s a really fun app and it has really cool swords to smash the bad guys right in the tummy and some people think that the boss level is easy and so do I so I think kids are aloud to play this too. Thx for you lovely app❤️❤️

Samari flash is great - This is a great game!!!!

This game is really addicting when I get on I can’t stop playing!! Its like the better version of the VR game SuperHot!!

This is an absolute super hot rip off

Great game but could the dude go faster

It’s really fun but I noticed it said classic on the skin shop and there were some square sections beneath it but I haven’t gotten any new characters is that a future update or what? And also I noticed a lot of people keep getting kicked of so could you fix that pls :)

I played level 1 closed the game to eat lunch but I went on again and it crashed but I had fun fix glitch and I will reinstall it!

It has bosses and cool stuff in it good job

hudsimmons - This game is cool

This game is really good I will recommend

TYSM the game had a loading bug and I was just about to type another review but I went back in the game and it was fixed! Best game ever

This game is really cool and fun

bye flesha - It’s so fun to play like my

I just want to say this is lit

THIS GAME IS SOOOO COOL AND SATISFYING

wy99xx4o1 - There should be more avatars

I think there should be more avatars or characters in the game when you add more then I can give it 5 stars. That’s all that is hindering me

It is a good game and I recommend you try it. Thank you for reading. 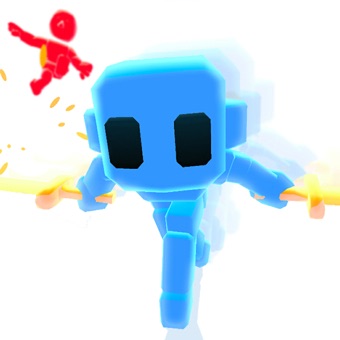