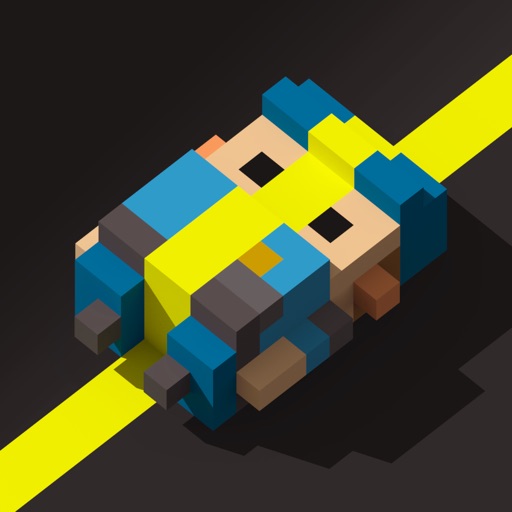 What is chicken jump - crazy traffic app? Imagine a deadly racing game - where you are the pedestrian!

Chicken Jump is an easy to grab and funny party game set in a town like no other, in which residents celebrate by jumping over waves of wacky traffic. Avoid being crushed as long as you can by jumping at the right time and get the highest score in town to impress your friends!

SOLO MODE TO MASTER YOUR SKILLS : experience the jumping festival insanity alone if you dare! Progress and unlock new content peacefully, undisturbed by your giggling friends.

1-8 PLAYER MULTIPLAYER FUN : play with friends on the same screen or try to control as many players as you can by yourself.

A PARTY GAME FOR EVERYONE : 8 hilarious arcade game modes such as high score and last man standing and many other mini-games to discover.

UNLOCK SPECIAL SKILLS AND ENVIRONMENTS : loads of unlockable character classes with different special abilities: police slows down traffic, scientists let you start at higher waves, aliens that alter the scenery and many more.

COLLECT CARDS TO INCREASE SKILLS : card mechanic, some classes’ abilities increase - the more characters you have from the same set, the better they become!

PLAYED BY MILLIONS AND COUNTING, ENDORSED BY THE GREATEST YOUTUBERS : 25M sessions launched on desktop and PewDiePie's big smile after being hit by a frenzied car can’t be wrong, Chicken Jump is pure jumping joy!

No internet connection required to push your jumping talent to the limit. Chicken Jump is your perfect friend on the go!

If you experience any problem with Chicken Jump, please contact our customer support team at playdigious@gmail.com. Don't forget to specify which device and operating system you are using.

Do you love Chicken Jump - Crazy Traffic app? Please share your friends!
Download and Install App Now 🚀 Play this game on your computer

What do you think Chicken Jump - Crazy Traffic app? Can you share your thoughts and app experiences with other peoples?

One of the better one click addicting type games. Except this one is good , they don’t completely cram ADvertisements up your you know what. Ketchapp does that. Can’t remember other big ones that used to be good but are unplayable because after dying every .9 seconds you have to watch an ad. I recommend this game I’m thinking about purchasing it without ads

I’ve played this on and off for several months now, and while the gameplay is fun and the collectibles challenging but accessible, I have been disappointed by the lack of updates to resolve persistent gameplay bugs. These include: 1) Settings changes are not maintained upon app close. So if you turned the sound off, you will need to keep doing so every time you load the app. 2) Playing an effect card simply doesn’t work. You either get no effect, or a randomly selected effect from another card. 3) Objectives often display incorrectly, sharing the same text for each objective and not displaying more than 3 if you have unlocked more. 4) Sometimes when you are struck, the menu options will not display and rounds will play out endlessly in slow motion. You can exit to the main menu, but it is not clear whether you receive credit for the results of the game. I’ve enjoyed my time with the game, but would still not recommend it to others unless the devs can clear some of these bugs that make otherwise fun gameplay frustrating.

Do you like sitting through 30 second ads? Oh, your answer is no? Well, the devs apparently think that you absolutely LOVE ads. In fact, as soon as I start the game, I’m presented with a 30 second ad. Instead of, you know, actually letting me play the game for a moment, there’s an ad. Seriously? You guys are so greedy that you can’t even wait to shove ads in my face? I get that the game in funded by ads, but never before have I played a game that is so unbelievably greedy that they start playing ads BEFORE any gameplay even begins. What an absolute joke of a game. I can’t uninstall this garbage fast enough.

Love this game its so fun and wonderful, and got me addicted as soon as i got it, however it would be good to have online multiplayer instead of having to share the device. But overall wonderful game!

This game is an endless arcade that is addicting and will have you playing and making that into the zone gaming face. Also the characters that are unlockable are amazing! I wish there would be another update to release new game modes and new characters.

The new update changed the keep playing cost from 30 to 50 coins but didn't feel like it made the game better. Most plays are still capped at wave 60 and assuming you don't get tricked by the alien car wave you make it to 80. The powers are decent but still don't feel like they work like the slowdown one. The pachinko drop changed from 1 hour wait to 5 to 6 and I assume keeps increasing as you earn new people.

When I started this game it was glitchy or would abruptly quit. I was determined to see this game work and I am so glad I stayed the course for an updated version. This game is so fun and addictive! My daughter and me love playing this game. Keep up the great work y’all and thanks lots!

I love this game I had deleted it a while back, but then re-downloaded the game to see all the new updates and changes. This game is so weird and I love how fast paced it is and the characters.

Developers have fixed a lot of the annoying bugs of the past and offer new content. Good job

I loved to play this game on the computer, so seeing a mobile version makes me love this game even more! The ads appear at the right times, so it isn’t a problem for me

I like it... not really much to it, although the addition of power ups and the characters having different abilities is pretty cool. It's a cute easy game.

Greymcruz - Thank you creator for this app

Not Colt - Bad Right Off the Bat

Scratches the crossy road itch. The UI is a little crazy but the gameplay is smooth. Too many adds if you don’t buy anythiing

It’s fun, but just when I start to enjoy it, I have to watch a 30 second ad. Sometimes when I start the game I can’t even play before I am forced to watch an ad. Disappointed.

Alright game. Responsive controls. I like chiptunes but this music gets a bit putrid. However, my biggest complaint are the ads. There are some very violent ads that play which doesn't make this game kid friendly at all.

One of those games that you just can’t stop playing!!

I really enjoy playing. Great time waster and I have to keep playing to get the goals lol

I love this game so much! ❤️💛💚💙💜 this is a game I've been looking for for a long time😁 thx for making it

It can be very nerve-wracking! Otherwise, it’s a good game.

Took would could be a fun time waster and completely ruined it with ads. Played one round and forced to watch a 30 sec ad. Another round, another ad. Closed the app and reopen - forced to watch and ad. UNINSTALLED.

And add a map to make

Wanting to collect them all

Tryhard204 - Glitch in the system

I just got the game and my game glitched out and I’m on wave 160.

Ben the game judge - Worst game I ever played

This game seemed so exiting when I downloaded it, but then I played and all you did was jump, play different modes, and characters. I’m a person with action and adventure so I say they should make it more fun.

Kar0ne - Not working after death

After loosing the game and choosing the red X it just keeps going. It counts every wave and jump even though the game is over. I did a screen record of it.

Redeli202 - Writing a review because I feel like it

I'm just writing this so it didn't say Write the Review! Anymore so yeah... it's fun, good time waster

Had to watch an ad just to open up the game. Quick delete. Another trash free game that’s a rip off of the original road hopper.

Rhvesper - Awesome game; addicting to get all the characters

Very fun and gets addictive!!!

This game used to be at least 4 stars until it stopped registering deaths in game, and therefore stopped awarding XP. Fix this bug and it’s back to 5 stars.

It’s lots of fun and addicting

Happy bday thank you for the free caracter.

I love this game so much

This game is just wow

Thanks for nice game, keep it up. Would prefer less pixelated.

This game is really good about the characters and backgrounds. It's tricky too.

...but hardly runs on my iPhone 6. Needs some love in optimisation.

Can’t find out how to play online

This app is great! I love the variety of characters and vehicles, keep it up, game devs!

It's fun for the first while, but it can get quite repetitive

Not enough coin drops dumb characters won’t let me play on my other phone won’t let us do 1v1 only lets us play together on Apple TV what they got against Samsung.don’t buy trash game plz not your while these losers only rate 5 stars because they want stuff.They take too long to give us a coin drop.

I love this game soo much

The applications Chicken Jump - Crazy Traffic was published in the category Games on 2017-08-30 and was developed by Playdigious [Developer ID: 1041387229]. This application file size is 217.83 MB. Chicken Jump - Crazy Traffic - Games app posted on 2020-11-09 current version is 1.8 and works well on IOS 8.0 and high versions. Google Play ID: com.firepunchd.chickenjump