Welcome to Gardenscapes! Rake your way through a storyline full of unexpected twists to restore a wonderful garden to its former glory!

Embark on an adventurous journey: beat match-3 levels, restore and decorate different areas in the garden, get to the bottom of the secrets it holds, and enjoy the company of amusing in-game characters, including Austin, your butler! What are you waiting for? Build your dream garden!

The game features:
● Unique gameplay: swap and match, restore and decorate the garden, and enjoy a novel storyline—all in one place!
● Hundreds of unique match-3 levels
● Dozens of in-game characters you can make friends with
● A lovely pet that is always there to cheer you up
● An in-game social network you can use to keep up on all the latest
● Different areas in the garden with unique structures: broken fountains, mysterious mazes, and many more
● A community that comes first—become neighbors with your Facebook friends!

Gardenscapes is free to play, though some in-game items can also be purchased for real money. If you don't want to use this option, simply turn it off in your device's "Restrictions" menu.

What do you think Gardenscapes app? Can you share your thoughts and app experiences with other peoples?

A major Gardenscapes update: music and adventures! AUSTIN'S ADVENTURES! - Go on an exciting treasure hunt adventure with Austin at the start of August! - Beat levels, get energy to complete tasks, and explore new areas! NEW EVENTS - A new season is here—Disco Season! Get all the rewards with the Golden Ticket! - Create a Corner of Italy in the garden at the end of August. - Earn even more special event currency—olivette—to decorate the garden in the Italian Abundance event. - Camper Van: help Austin and Robbie renovate the camper van of their dreams! - Earn even more renovation tickets to fix up the camper van in the Upbeat Vibes event at the start of September. ALSO FEATURING - Celebrate Gardenscapes' birthday and get boosters and a unique profile picture at the end of August! - Save the seals by the old lighthouse and build your own wonders of the world in the new area! - Invite friends to the game to get rewards! - New match-3 element: Planters. To collect all the Plants, match pieces of the same color next to them.

I love the game. So creative

The number of moves should be increased but asides that... perfect!!!!🥰

This is the best game I have played all my life. Very charming n engaging

Very enjoyable and satisfying - yet sometimes frustrating! If it were too easy wouldn’t be so rewarding 👍

Very lovely game 🥰 and every level is an adventure.. you should try it 😊 Thank me later 😉

oobee1kanobi - I love this game

Very interesting and tasking. And I love the variety of things to do. I’m sure having a swell time.

I really enjoy the game

In the ad, you say there are mini games to play but when one actually downloads the app, there is no mini game. Stop deceiving people in order to get them to download the app!!!

This game is too hard. Very little moves for a difficult level. I have been in one stage for days now playing to get some stars to fix things in the garden. I’m gonna uninstall it. I don’t have such time to waste.

After playing and going a very long way in the game, I opened the game one day and everything was gone and I had to start from the beginning, even after saving my progress in the past with my Facebook and Apple ID, and nothing was done to restore it, I had everything ... it was really frustrating and I had to delete the app in annoyance

bed c - Why do we always have to update every minute???

Good game but each time you are required to update! At least twice in a month or so. The frequent update request is just too ridiculous! And the Mb allocated for each updates are crazy! Please fix this

Good game, but installing updates should not be mandatory all the time, and the updates are to frequent.

To be honest, I love this game. It's not just a game but built to enhance our thinking and creativity. I consider time spent playing this game as time well spent. 😍👌🏽

I enjoy playing this game very well. but the moves are not much especially for super hard levels. sometimes i spent 5-7days trying to win a level. And again the green cash is hard to get, & the costs for the things are high i have to play for lika 2weeks before i can get enough green cash to buy jst 1item. but I like the game anyway. i can’t go a day without playing 😅

I was enjoying my Gardenscapes until I was prompted to install an update. I did and could no longer play. It always pops up an error message “additional assets needed: 11.70mb” What am I expected to do with that?

Why advertising what is just 10% of the game? Dragging the attention or interest of the wrong thing, only for someone to get the app and start playing candy crush most of the time. Then that should have been the body of the advert, no?

If you are not enjoying this game my dear you’re not good then, best game ever I never regret downloading it, I enjoy it to an extent I don’t even know my level again it’s just play and play and play

Dope game, quite drilling and brainy

I updated the game and can’t access it, it’s not opening can’t play the game 😡🤬🥵

emmystickx - I love this educational game

It makes me think and spend wisely. Thanks God I made the right choice of downloading this game...

Hey developer Could you guys calm down with the frequent mandatory update . Make it stop

I enjoy this game so much but it seems to me that the super-hard level is truly rigged to take all my boosters and an average of 3 days of continuous playing before I can surmount it. Is there a way you can fix it?

I love this game so much and cannot do without it. It drains my battery so drastically and now after updating it my phone temperature increases drastically once I start playing. I might have to stop playing.

This game is just like HomeScapes but just in a garden its the worst game to me because its jist like candy crush but slightly diffrent and nothing in the ad is like it so i'm giving it a one star!

Really a nice game. Am addicted to the game that sometimes I forget that I am married.

The game is not working again on my iPhone 7 Plus. Just after I updated it is not opening again since 3 day now 💔

I have been playing Gardenscapes for 2years now ,it’s addictive , tasking and exciting. I recommend it 100%

mkkkkktt - Why i hate Gardenscapes

I hate Gardenscapes even Homescapes Because some of the Levels are too hard🤦🏾‍♂️🤦🏾‍♂️ anytime i play it just gets me angry and annoyed. I mean why would i play a very hard level just so that i can olay with my dog or do something stupid its just too hard😡😡 waste of time.

I can’t open the game all of a sudden. It just loads and later tells me there’s no network even when I’m not using any data

Pls don’t download this game, it is a waste of time honestly

Good enough for me I love it

The Ads And The Game Are Completely Different If You Make An App Please Feed Us With Things We Would Like And Prefer To Play So If You Think That The Ways The Game Is In The Ads Is Better Than The Real Thing Then Why Not Make It Like Like The Ads And Simple Remove The Candy Crush Or Just Make Another Game Like That!😄 Please ⭐️⭐️⭐️

I personally think the creators or developers of this game deliberately makes some levels extremely difficult so we can keep spending our money buying endless coins that’s never enough. I think the money is too high and the coins we get from each level completed is ridiculously small. Nice game but I’m serious tired of having to pay for coins... I guess I’d just have to abandon the game then...

It just looks like a brazen move to get you to spend your money. Too many flaws for something so addictive.

Play Gardenscapes with me!

Play Gardenscapes with me! 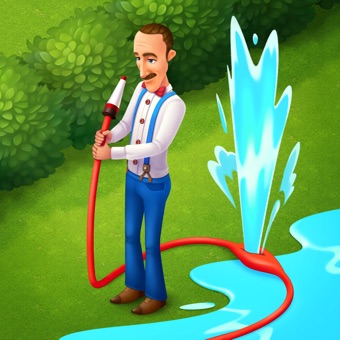