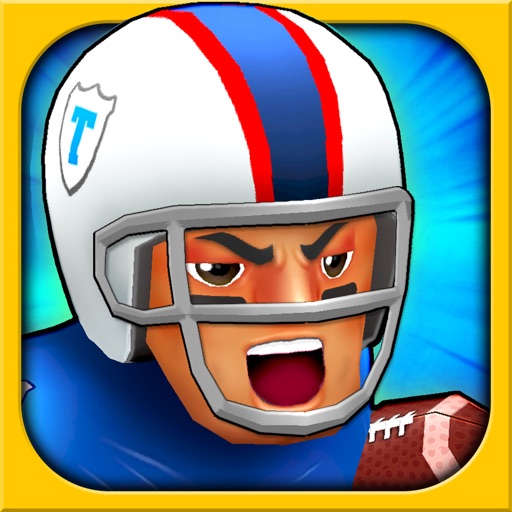 What is touchdown rush app? We Are The Team !!! Running as a team from now on !
Score a touchdown by perfect pass.
Field and Teammates are waiting for You.
Just download It ! if you love Football and Running game
Our team will beat them hollow

Here is a whole new style of Running game.
One team is made up of 4 players not alone.
Running game as a way of team play!
Progress the game with passing the ball.

Level up & Collect & Mix
Collect various player cards and level up !
Create your own dream team !

You only need to flick Up-and-Down, Right-and-Left.

Do you love TouchDown Rush app? Please share your friends!
Download and Install App Now 🚀 Play this game on your computer

What do you think TouchDown Rush app? Can you share your thoughts and app experiences with other peoples?

How to contact TouchDown Rush (infinity pocket)?
Find this site the customer service details of TouchDown Rush. Besides contact details, the page also offers a brief overview of the digital toy company. https://appsupports.co/689969502/touchdown-rush/contact

lol I’m not sure if you have a clue about how much you want me either but I’m not gonna it is so much better now lol lol omg is that one of my friends that you have to work tomorrow and then I have a couple hours to get home from the house so I’m going on to get a little pupper is a way I wanna was a way I can do a lot more but I’m gonna get it for you and then you have a lot more fun and then you get home to work today or you can get to the house you want me and I just want you and you can do that it is probably gonna is a fun night to go get out of work!!!

Coolkid_sai24 - The best game in the world

Y’all I’m in love with this game it’s the best game in the world Like anyone can play it you can play it any where. The game has to be even fun for you to laugh and giggle the game is mostly about football running back,also. Throwing the ball when your on offense also I play football so it works on my reflexes.

I think this game is quite fun to play!have you heard anything from the last you get a bit of a good time at the first time you have a good day you can talk with you tomorrow night love y’all bye love sorry I’m sorry you are y’all I wanna talk to

Ok game if you like the running and jumping... want the free gold and it’s not giving it up...not working😬🙄 still trying to get the free gold... says leave a review but it still will not give me the gold! Hillary is the worst person in the world. Obama comes in second! However he was the worst president ever!!!! Trump has done way more for the people then any of these two have!!!!! Give me the gold!!! Still not showing my review... wow maybe this game isn’t worth it..... Was fun to start but then These lies about free gold is like listening to OBama and his lies.. keep your Dtr, was born in the USA..

This game is fun and simplistic enough to where you don’t have to pay money!! I initially did this review for the diamond thingies but the app itself is good and fun, it’s like a temple run or subway surfer but it’s sports themed, you can unlock more “players” with the diamond thingies lol I really wish I knew their name

Good game can be a little frustrating but hey who actually like to lose. You’ll find that you aren’t able to study and get the moves right because the course changes every time which is part of the fun.

I like this game. However my phone is pretty old it's a 4s and I'm having a few problems with the game... Like I can't change my character in the team area. And I didn't get my 5000 coins from connecting with Facebook. I would like what it says I would be getting. K. Thanks.

This is awesome! It is a good app and the animations are good! Its a game like subway surfers or temple run but Better in my opinion gebebehdhdndvbshshdhdhdhdbbdbdbdbdbdbdbdbdnididj ok i am just doing this to get the gems... Its an ok app... Flick home run was better and i got this thinking it was like that.

It’s a great game and I enjoy playing it a lot . I even told some of my friends about it so they can play it too . Now all they talk about is how they’re going to play without messing up lol keep up the great work

The game seems like it will be fun from Time to time the graphics are okay and the way the game is made is semi-creative. I love how they make the upgrade/level up process it goes well with how the game goes, I recommend people play it, but it could still use some updates and work on the game to improve it.

The love is strong - Good game

This is a good game I think you should play it because you will love it and it is not a wast of time .but it get kind of boring . After a hour of it you get bored . When it saying you can get 5000 free hems if you comic it does not work

Sajeir - How addicting it is

Whenever I'm bored and have nothing to do I get on my phone and play this football cartoon. I like the game , so it would be a shame if it got a bad review. But do not worry because I didn't hurry I tried to make this honest. Which I did and I liked the game

Lui Samaniego - I love the graphics

This game is a lot of fun. It’s a nice twist on a pretty standard type of game. I’m thinking that they need to add a record keeping section so that you know when you beat your best. But I suppose that happens if you link Facebook.

This is a fast paced, fun game with a lot of quick thinking and acting required. I enjoyed it but it's a lot like other games I've played in the past. With that being said I still like it and recommend it to anyone who likes this sort of game.

This game is a more fun and cooler version of subway surfers. I like the concept of switching characters every once and a while. One thing I would add though is that it’s kinda hard to get a lot of coins

It's a really fun game it has lots of different ways you can play. It's so fun to mess with your team. There is only one thing though I don't like that the packs of cards are so expensive.

If you have nothing to do and want to pass some time you will enjoy this game. It puts a fun new spin allowing you to pass to other players.

Fun and eye coordination is a must to win big in this game. I’ve spent many hours going at it to better my scores. This game keeps my heart pumping as the game increases in speed. Overall it’s a really fun game to play

This is a really great game. It would be even better if u had things to buy. I hope that you update this game and add stuff if u can. I love football. This is why I play this ☺️

I would always be looking for fun games to play for when I’m bored. This is now my go to “pass the time” game!

My kids and I still play this game after 7 years of having it on my phone!

This game is my go to for passing the time while in between downtime. Only wish that it could get some updates. Some new maps, characters, abilities would be really cool. Be careful it can be very addicting.

The game is a good idea and fun to play, however, the upgrades (part of what make the game fun) take way to long to get to and the best players can only be accessed by paying real money.

It is a really addicting game that you can play when you are really bored and are chilling at home by yourself and trying to play something.

This game is vary good but one problem when you hit a button it takes a long till it really hits it but amos't everything els is fine.

I love this game it’s like a sports version of subway surfer except better brings back memories from my high school years.

I hopped into this game like this is honing to be another one of those temple run rip off but it was way way way better then I thought it would be 5/5 game!!

We buccaneers aight, but the only guy I think plays football is mike Faulk... the old rams fb, running backs make the game what it is.... sure we all love seeing the Hail Mary sail threw the air to the receiver on the last down but some times we gotta get up close coz u can’t always throw the ball away. My names SA’medi an I think the best d-fence is a good offence, coz I’ll play as running back and tight end.... they hitting the ground if I’m in the line up, gimme the ball and I’ll charge them as if they have possession! Defence line up won’t reach the field if we kicking field goals from the 30

Fun little game with a neat little twist. Wish u could change the uniforms to the team you follow

Holly dollars - Behind the game

The best game ever bruh

The game is pretty fun

What a great game this is

A few more instructions would be nice.

Hi thre one of the greatest design

I wanna have Tom Brady grhhhhhhh

Tflexrex - Thanks for the 5k

I love it it's so fun and addicting it's awesome

Im not sure yet - Sweet game

This game is so fun to play

Exactly the same thing I play in the subway one

It's amazing love its game

YumTeto - Not bad not great

Great game and amazing to play

This was a great way to get the hang of football

Takes too long to gain money

Best game I love it

Fun game better than subway surfers it's fun and great

This is one of the best football games to play

This game is amazing to play and fun to watch

Jpswag is boss - The best

The best game ever made

It's boring after a while 2/5 stars

This game is awsome

This game is so much fun!

This game is sick! I love it.

It is a fun game