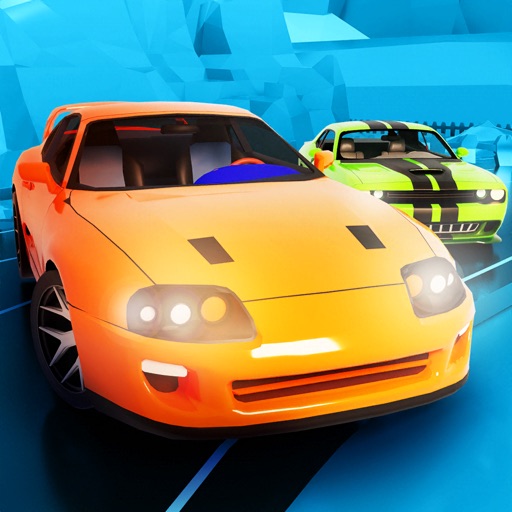 What is drive to evolve app? Pass through gates and evolve your car. Race with opponent car and win the race!

Do you love Drive to Evolve app? Please share your friends!
Download and Install App Now 🚀 Play this game on your computer

What do you think Drive to Evolve app? Can you share your thoughts and app experiences with other peoples?

How to contact Drive to Evolve (Rollic Games)?
Find this site the customer service details of Drive to Evolve. Besides contact details, the page also offers a brief overview of the digital toy company. https://appsupports.co/1616514269/drive-to-evolve/contact

I seen an add for this game on tiktok. I though it would be very easy. Boy was I right. If your good at math, and know when to shift correctly, this should be a very easy game for you. There’s only like 8 car models like a other review said, but it’s not that bad. Just a average game you’d see on the App Store now a days. I don’t know why there’s a bunch of 5 year old kids leaving bad reviews on this game even though it’s really good with what it has to offer. But yea, great game. 👍

I saw a ad for this game while playing another like it but without cars, so since I like cars I decided to download. And the game was what the add showed, mostly. In the ad it showed at the end of a level you got to race side by side with a dash and everything! Now, this is in the game but it’s completely different. No gears no mph counter no nothing! It’s only you driving 3 mph against a car going 10 mph. Also, this game is LAGGY. I tried to play a level and it kept freezing or just slowing down for no reason. Also I ran into a bug on (I’m pretty sure) level 7. I was driving and I got one of those things that adds 65 years to your car so I used it and got to the end! But when my car made it up to 2020, it just stopped there and had confetti coming out of the sides with nothing for me to click on. I’m not really sure how to get out of either… So now I’m basically stuck on that level and can do nothing about it! Please help with these bugs/glitches! Thank you for your time and for reading!! I hope you can take my comments into consideration.

Game was fun at first and definitely helps waste some time. After about 5 levels the game began to lag constantly and freeze making it frustrating to keep playing. I know most of these games revolve around ads but this one plays an ad after every single level, they can’t even give you a 2-3 level grace period every now and then. Was fun for a little while and lost it completely with the poor functionality

In the beginning the game seems fine, but the designers of this game allotted to much ram space for the advertisement companies. The banner on the bottom of the game as you play it lags the game to a screeching halt after the first couple levels. The game mechanics are simple and there shouldn’t be any reason a phone can’t handle it, but the advertisements they are allowing to play on each level and during the level are eating up all of the ram space.

Connorgavin7502 - Exactly what you’d expect, except it runs terribly.

Exactly the game you’d expect, just another cookie cutter game of this type, down to the fact that it runs like garbage on even the newest iPhones. Can’t play more than 2 or 3 rounds without the game completely lagging out and heating up my phone. Severely takes away from the experience and leaves me feeling bored and frustrated.

I just downloaded this game because I like cars thinking that it would be a good game but it’s not because after you go through the years you have a race in which it does not allow you to go faster then 5 mph and it forces you to lose. Really? I gave it two stars because I like going through the decades but I do not recommend this game 😡😡😡

Shawn the cool dude - It like that money game

Watch an ad to get this, then watch another ad immediately after to get that. Then after choosing to watch an awarded ad, you get forced to watch a non awarded ad after watching those ads, which freeze up and you have to restart the glitchy game. Do better.

This game is fun and good......except for the lagging and bugs. I passed my first level and the second one glitched every second! I think the game is fun, but I wish I could play it with no lagging! It paused then resumed , then paused a agin! So many bugs lags and glitches!

I’ve been playing it for maybe 5 minutes and it’s already offered items if I watched an ad several times. I even felt like I had to watch two in a row so I could up grade it a little when it offered another ad. I know a lot of people like the game but it’s just not my cup of tea.

Typical game… quickest way to evolve is watching ads… ad after every level, would have been better if cars went faster as years progressed car from 1880 does 180kmh car from 2000 does 180kmh…

Dndjdnjf - My review on this laggy game

This game is the same but the end is the complete opesit I thought it would be so good and it is for the first of it then it not but if you want to get this it is okay.

Ngpetersen3 - Another game that’s different from the ads

Ad shows you driving through a course leveling up your vehicle, then you race an opponent afterward. That sounds like fun but that’s not this game. Another game company who can’t seem to accurately market what game they actually made.

Gudhehchwjcjejcjwhxhchhxus - Good game but too many adds

This is a good game overall but I don’t like how after every level you have to watch an add.

Connorrobisoncrsobison - Great but it’s messed up

This app is mining crypto in the background while you play it. As a data engineer I can see the traffic that comes in and out of the app and for an app that doesn’t need internet access to run, there’s quite a lot of traffic

The game is loaded with ads every round and crashes 90% of the time when you try to open the app.

this game is very fun and it helps pass time quickly but one thing i always get angry about is everytime i get a year over 2020 it doesn’t count when i’m done with the level. it doesn’t go past 2020!!!

MokoBella - Way too many ads

On tiktok u could race at the end, thats not seen anywhere in this game, when did ads have games in them btw.

This is a bad game because you can’t get pass level 1 because the car is so fast and I am only 9 but I know math.

FoREVer Steve - Not as advertised

I want a refund on my purchase. I’m still getting videos forced on me. Refund my purchase.

IOS 12.1.1 game says that it is compatible with IOS 11+ wouldnt suprise me if they just clicked buttons when they uploaded this

You’re telling me a Model T is beating a Supra in a race? Unrealistic, but fun regardless.

Progamer2019 - There’s a game between your ads

Game has too many ads, too easy, not even addicting. Game is absolute garbage.

Would not recommend Game does not work at all

79% is advertisements 21% is a game and a disgusting game How do you decrease the number of years and not increase the years in a game???

Lukas cool ok ye you no yeeeē - It bad

Worst game ever full of ads and every round you loose

Stop with the ads and videos. You ruin a great game

This is why modern app games are so aids

it has so many ads it makes me wanna kms .. the cars barely change and u dont get past like 1950’s

This game is cool

What a complete waste of time. 1 minute long advertisements for every 15 seconds of gameplay. Although the game play is a little catchy it is very basic and is purely designed for you to watch ads continuously. Don’t waste your time.

This game has made me a girl and I’m not liking that please get it fixed.

Good game but WAY too glitchy

Ads, ads and more ads unless you buy ad removal.

This game is fun. Can you add a option to pay money to remove the add frame at the button of the screen it’s a bit annoying it hides the car.

Martimus007 - Again too many adds

game is fun but the drag race feature from the ads is not in the game.

Fun game, but plays Ads after every short race and when it comes to watching an ad to get free unlocks, if then says “No Ads Available” 🤨

it’s always games like this that have the most ads… “get a new car for an ad” or “no thanks”. if you press no thanks you still watch an ad just for no reward… this game sucks!