Visit Volcano Island, make memories and have a great time!


Go on a vacation, collect souvenirs and take pictures in this enjoyable board game for the whole family. Travel around the island and compete with family and friends in activities, such as scuba diving and building sand sculptures. The player with the most and happiest memories wins! Save your memories in your scrapbook and make different choices to complete your collection.

Based on the classic board game The Game of Life!

Just like the original, spin the wheel and follow your fate as you go on your dream vacation. Families have enjoyed The Game of Life for more than 40 years.


Choose from a fantastic cast of characters!
Pick your own unique peg and choose between the adventurous backpacker, the surfer family, the travelling sisters, and many more! Once you’re ready to roll, select your ride and dash around the island in a scooter, sports car, motorcycle or bus.


Play THE GAME OF LIFE Vacations game with up to three friends on one device or play online with friends and family for some classic board game fun.

THE GAME OF LIFE is a trademark of Hasbro and is used with permission. © 2019 Hasbro. All Rights Reserved

What do you think THE GAME OF LIFE Vacations app? Can you share your thoughts and app experiences with other peoples?

Hi Vacationers, we’ve got a new update for you! - Tell the other players how you’re feeling with the new emoji chat! - Log in quick and easy now with your Facebook account! - We've made several improvements to make the game run better! Thank you for playing and enjoy your vacation!

1 - I really like that it is really like a Game of Life board game. I also wanted to make a suggestion for I called Red Rock Resort. Souvenirs - Buy from gift shops. Post cards - Land on post card space. Pictures - Land on a camera space or picture site. Races for cards - roll wheel. Highest number wins $800. Hotel - Land on Hotel Space. When you reach end, add up money you got and cards, souvenirs, and pictures. Highest person with money wins!

Where are the other vacations

I do have one complaint. When I “save and quit” a game, it won’t load back in. Please help.

Fun game. Would be cool to have a chat feature in online games with friends though 🤙

Did not like please refund or exchange for the real life board game and I will remove this review Overall: not fun

There’s a few glitches in the game (avatars are flipped around so they’re backwards, select “tubing” and your character does a cliff dive; select “cliff dive” and they’ll go tubing), but nothing that detracts from the game. Please add more destinations, though — I don’t want the vacation to end!

I don’t know where to start with this game it is the best game ever I even have The game of life life is soooooooo much fun you get to pick your character and then the game begins whoever goes first is always fair you pick your hotel and get bonus points and go on safaris and take pictures and you get souvenirs.I love this game and I hope you do to so what are you waiting for download now!!!!

Too early to tell.

Literally one of the best games out there!! Even better than the original because you actually get to engage the events!! Totally awesome and worth every penny!!

rosedowd - Paid for but not working.

Love the game. We want more islands to play on please .

You’re playing with bots pretending to be online users. You can go take the dog for a walk and come back and the players will still be there reacting to your reactions like nothing happened.

It’s so fun! And you can play with real life friends!

My daughter LOVES this game, but I hate playing it because the spinner doesn’t work. I have to claw at my iPad Pro like a an idiot trying to get the thing to spin. I almost jumped out the window it’s so frustrating. I would like a refund.

It is so much fun like I said in the title. It is so worth the money.

New’Jack Nucci - To each’s own

I think it is a very good game but it is very hard to spin the wheel if you have sticky fingers.

I kept on going last

It’s been two days and the game I purchased won’t load at all!

Such a fun game! We have had a blast playing it. The graphics are great and it is such a cute, fun game! Definitely recommend!

Mike Dorn - This game is so fun!

It’s ok but I am sick of the same island

This is almost as fun as the board game but it is close I enjoyed the game. Very much and I give it five stars

I really like the game, especially that you can play with friends or people in your household as well as online players. I wish you would fix the bug in the Tubbing vs Cliff diving option, it does the opposite of each. Well at least on mine. Maybe I have to download it again, but just barely got it today so don’t see how that could be it. Otherwise it’s fun, now if only I can master the wheel spinning lol, my wheel doesn’t like me.

This game is so worth it but their is a problem it is hard to spin the wheel and too jet what you want so ya I say purchase this app.

Unfortunately it never loads saved games, it always gets stuck and you end up losing your progress. Sure would be better if you could actually pick up where you left off!!!!

deepdiverfred - Crashes at start every time

Cannot get the past inviting others to play then CRASH

Sinopa Crystal - Love the game, but...

Kid disks - Not worth the money

So disappointed with this game I can’t even begin. There is only one course and they make it impossible for you to win. Rigged game, dont waste your money

the girl who played mincraft - Awesome

Great game and it looks cool to but I always get the ! Mark so yes and a zombie island if ya made it it whud be cool so yes it is awesome

GINAMARIE'S FARM - Need more to do!

Awesome graphics, but I got bored after the first day doing the same thing over and over. I was excited at first, and it has a lot of possibilities, but this game needs more of everything before I’ll be happy I spent money on it.

I love playing vacations but can’t always play the game through. When I tried to play a continued game. Stuck. Closed and tried again same thing. Help was none.

We need more game boards or opportunity to have a themed board for certain themes of the month. Maybe in addition to editing our own board pieces for fun with wacky hairstyle or signature pieces. And the ability to sign our names in sharpie etc. And a preset of messages to use during gameplay.

Love the game but I am already sick of playing the same game over and over, also I have 47/48 items missing a postcard and have played it over and over and cant seem to get the last item. It emis extremely frustrating and makes me think there is a glitch that the last one isnt even popping up in the game at all. Please fix!!!

Just when I need something quick to do when I’m riding in the car and want to tune things out instead music I play this game. It’s not long and drawn out like the board so I’m very happy this game is available. Love the short videos of the game actions they are pretty funny. Great entertainment.

Saan-Saan - The game is really good

The game is really good but whenever I try to spin it is kind of hard, but overall it’s really good!

I’ve already collected everything for Volcano Island so I hope more destinations are coming out soon!

Very nice game! Like the new cars, characters ect.. an my 6 yr old loves it also 😄👍

This game is highly captivating, I often find myself playing it until my phone dies on accident

Terrible and slow waste of 1.99

This new version of the game of life is so fun and cool love it!

I want a refund for this game

Bored at worked purchased after playing the real life version loved it.

I love this game.. however, the spinner could be easier to spin and when do we get new spots

The idea of this game is a fun concept but unfortunately on my device when I am spinning at the beginning of the game the screen stays black, and once the game progresses there is no spinner that appears. Was really looking forward to this one but was sadly disappointed.

Why is it that whenever I go onto this game the screen stays black when I am supposed to spin. Want a refund..

So hard to spin!!! I try 10 times before it finally acknowledges that I’m trying to spin. Gave up on the game after my third turn It was so frustrating

Love the game, just wish there was more than one game board. :(

Just dowloaded this game and everything was working fine until about 5 minutes into the game the spinner stopped spinning for me. I’m able to move it but it won’t do a full spin and land on a number and continue with the game.

So I downloaded this game and I started playing it but when it got to the loading screen to put you into the round when it says "volcano land" or whatever it says it freezes and the game crashes. Is there a way that this could be fixed if not I would like a refund if possible. Otherwise it seems like a great game. Thank you.❤️

I like the premise but would like more boards soon and please don’t make it like the other game where I have to pay to get the other boards I already paid to download the game that should be enough. 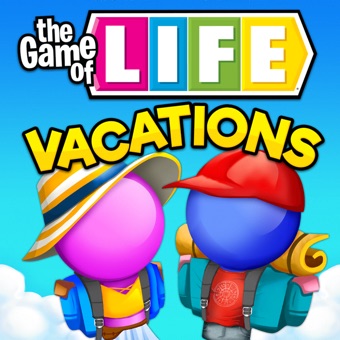 THE GAME OF LIFE Vacations Wiki

THE GAME OF LIFE Vacations Languages