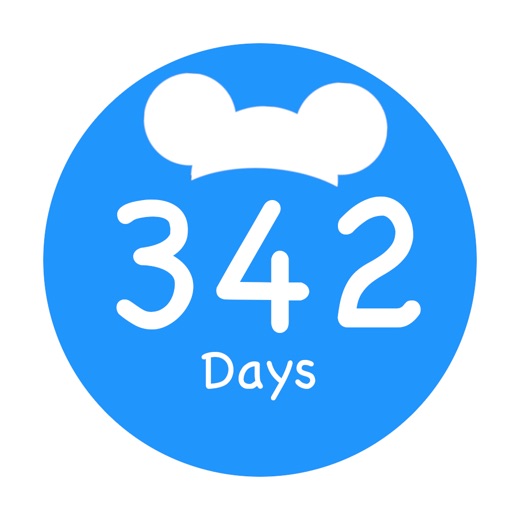 Customization is Endless!
- Change the wallpaper with built in photos or upload your own!
- Change the text color!
- Edit the countdown title!
- Pick the date of your trip!

Have a MAGICAL day!

What do you think Countdown for Disney World app? Can you share your thoughts and app experiences with other peoples?

Updates: - Fixed a bug that wouldn't allow the music switch to turn on/off - iOS 13 compatible Thanks for using Countdown for Disney World!.

No matter what I do the music will not stop. I slide the toggle and go back to the main countdown screen and it goes right back to playing music. This is on a 11 pro on 13.1.2. Please fix I do not need music to see how many days I have left till the trip. Will update star rating one fixed.

The countdown works well. It only shows days, no hours and minutes. There are only a few background images, but they’re pretty good shots, and you can upload some of your own. The music is my favorite part! Plays a few seconds of a Disney sounding magical tune. The reason it lost a star for me is that the icon badge gives you the impression that it will change along with your countdown days, but it doesn’t. That was a bummer. If that changes in the future I’d pay even more for the app!!

Notified me of the ability to book Fast Passes a day after the period started. Fortunately I had already put the date in my calendar and only lost 1/2 day. Many of the morning times for the hottest attractions were gone. Then there is the music thing. Could not turn it off. I embarrassed myself by trying to sneak a peek in a meeting. If this were free it would be cute, but to charge anything for it, opens up expectations of functionality.

I just paid $0.99 for this app after reading there was an update a month ago to fix a bug that was making the music stay on. I thought, “I’m glad that’s fixed!” It’s not fixed! So annoying!

Tracymae44 - Better than other countdown apps

I like this countdown app a lot more than other ones because there is a lot more customization. You can change the wallpaper and my favorite is the music. Very good job 👍🏼

I love the app! Would you please make a widget for iOS so I can see the countdown all of the time. I used to have one, but with this new operating system it has disappeared.

The bug that is listed as fixed is not fixed. The music slider has no effect. There is no widget available. The app support link takes you to a private account Instagram page. When you add in that the app hasn’t been updated in a year. Apple should remove this from the store and refund everyone that has purchased it.

One of my favorite things is the incredible music that happened when you opened the app. It no longer does that. Any idea how to fix it? It was truly delightful!

There is no setting to rotate the pictures every time you go into the app. You can only pick 1 picture and that’s it

Very cute for counting down the days. Wish it notified you as the days go by. Also the option to turn off music doesn’t work.

The pictures for the background are nice, but I’m disappointed that the icon number doesn’t change. It’s stuck on 342 days. It would be nice to see the number of days left, without opening the app.

Love the countdown and the pictures. I just downloaded it today (March 5) and you can’t turn off the music. According to the version history this was supposed to be fixed in their last update but clearly it hasn’t.

How do I use this countdown as as widget? Description says you can customize your own widget.

I was able to change my photo and text but unable to see my 180 day dining date, 60 fast date and notifications.

Does this app not allow you to post to social media?

I got this for my daughter to put as her wallpaper to help her count down for Disney world I cannot figure out how to set it as her wall paper?

Every. Single. Time. This music will not stop! Waste of a $1

The music option to turn off doesn’t save. It always resets itself and plays the music every.single.time.

On 11/28/21 I purchased this app, & shortly after, contacted Apple support. The music does not shut off, & the color scheme won’t change. Apple support advised to me first try to contact the developer of the app, which I did, & he hasn’t responded. Deleting this app & requesting a refund.

@WaltDisneyWorld . Before I realized this was an add for Disney World, I thought it was a countdown to Wednesday! LOL😀😀😀 The most magical place on earth will be America w/o the orange menace! .

The applications Countdown for Disney World was published in the category Travel on 2019-05-11 and was developed by Ethan Brimhall [Developer ID: 1214637122]. This application file size is 10.83 MB. Countdown for Disney World - Travel app posted on 2019-10-30 current version is 5.0 and works well on IOS 12.1 and high versions. Google Play ID: com.ethanbrimhall.Disney-Countdown